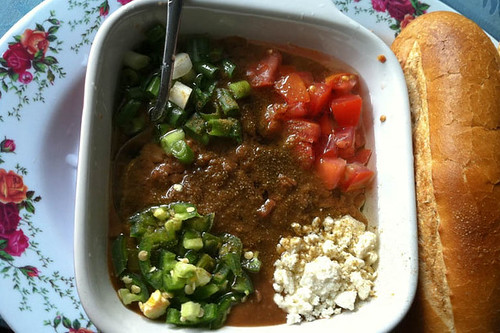 The second post in our Ethiopian Restaurant Series takes us to the Blue Nile at 456 12th Avenue. Of the CD Ethiopian Restaurants we have visited so far, Blue Nile is easily the most accessible to those new to Ethiopian cuisine. First, it has a functioning website, so that you can peruse the menu and become comfortable with the choices. Second, it is open for weekday breakfast and lunch (lower investment of time and expectations than dinner). Finally, spices are applied with a light hand.

Set on 12th Avenue, just a block south of Watertown Coffee, Blue Nile is a small blue box of a restaurant.  On the first occasion that we visited, Ghana v Uruguay played a World Cup match on the flat screen LCD television mounted to the wall. A group of Ethiopian men had pushed chairs against the back wall and were watching the game intently.  They sweetly humored the sole Uruguay fan in the restaurant, while sipping Lipton tea. 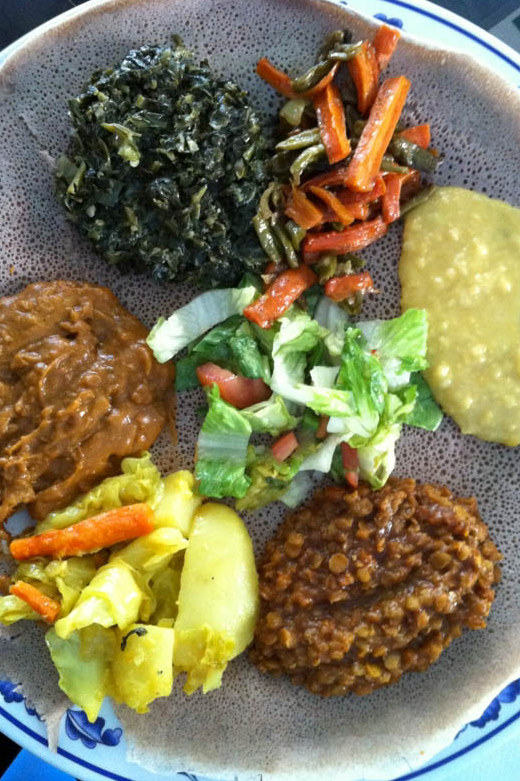 We ordered the Vegetarian Combo for $11. This was a standard Ethiopian vegetarian mixed plate composed of Shiro Wot, Gomen, Tikka Gomen and green beans and carrots.  As usual, the Gomen (typically Collard greens) was my favorite.  We found the Shiro Wot blander and a bit more mashed than usual.  Our trick of pairing the Gomen & Shiro Wot in one bite did not compensate for the lack of seasoning in the Shiro Wot.  So, we asked for and received some Awaze (a mild chili paste).  This solved the seasoning issue.  As it turns out, we left the restaurant at the right time – when Ghana and Uruguay were tied 1-1.  We avoided the agony of the penalty shootout (wherein one of the Uruguay players blocked a Ghanian goal with his hand calling it “the hand of God”). 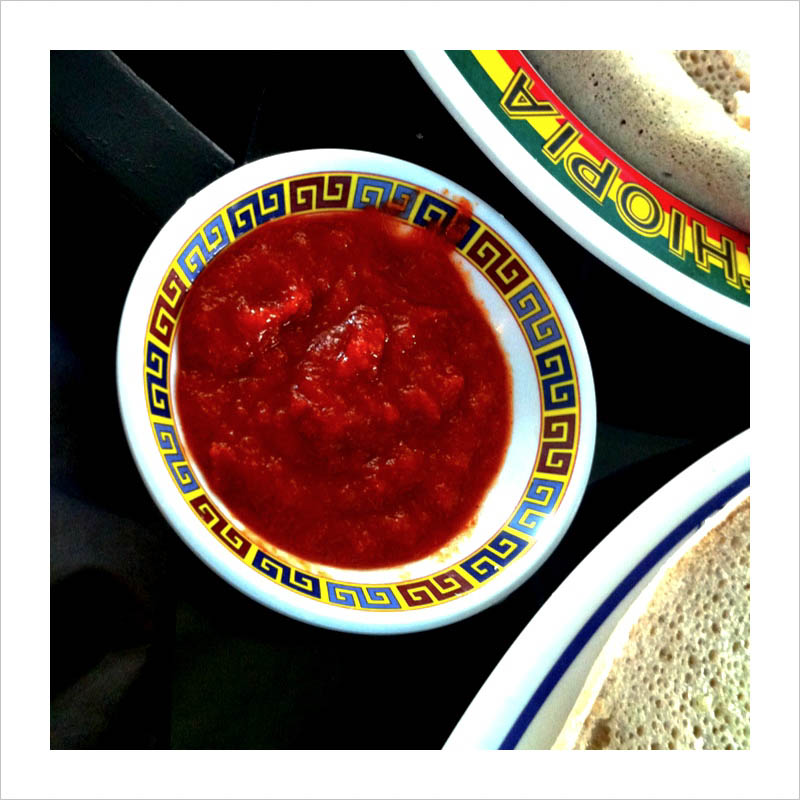 Earlier this week, we returned to the Blue Nile.  No World Cup game but “Say Anything”, a movie that was filmed in Seattle, played on the television. We sampled Blue Nile’s fantastic Foul ($7). Foul is spiced fava beans in olive oil with diced tomato and onion.  At Blue Nile, they serve the Foul with diced Jalapeno and Feta cheese crumbles. Instead of the flatbread that is served alongside at Middle Eastern places, Blue Nile’s Foul is accompanied by perfectly toasted loaves of thin-crusted bread, .

Blue Nile service is friendly and appropriately attentive. However, English comprehension may present an issue. On one occasion, we asked both our waitress and the proprietress if we could have some Tej (honey wine), but neither seemed to comprehend what was asked for.  We did not press for the wine, since it was lunchtime, and we were full.