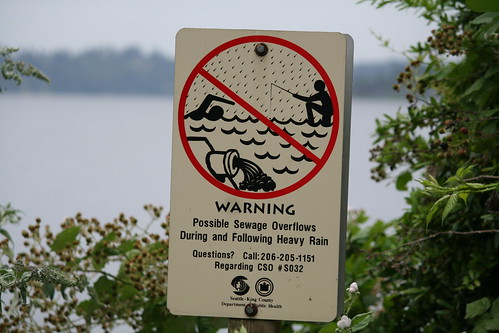 About 100 million gallons of raw sewage is dumped into waterways around the city every year due to overflowing pipes. It most often happens during periods of heavy rainfall, when runoff from roofs and city streets overwhelms the sanitary sewer system, activating old pipes that direct the effluent into the lake, ship canal, and Puget Sound.

On our side of town, there are twelve overflow locations on Lake Washington between the 520 and I-90 bridges, which in total dump an average of 2.5 million gallons of sewage into the lake each year. Most of those pipes see discharges between 2-6 times per year, and one individual pipe had 26 discharges in 2008 alone.

Wondering how to tell where these overflows occur? Start by looking for the small pocket parks that dot the Lake Washington shoreline. That city-owned land is often the right-of-way for the old sewer pipes that carry the overflows into the water. Then look for the signs – the city marks each overflow location with a warning and an ID number for that overflow. We’ve mapped each location in the map at left.

Fixing the problem won’t be cheap. Tighter environmental regulations are pushing the city to act to reduce the frequency and quantity of overflows over the next fifteen years, with a goal of reducing the total volume of overflows by 60% in 2025. According to early cost estimates, it will take $500 million to construct all of the projects necessary to reach that goal.

That funding will have to come from the pockets of city sewage rate payers. Seattle Public Utilities has forwarded recommendations to the city council that call for 4% increases in residential wastewater costs in 2011 and 2012. Drainage rates will go up by a larger amount, 12.5% in 2011 and 11.5% in 2012. Depending on the size and water usage of an individual household, that could mean an increase of $50 – $200 dollars per year.

According to preliminary estimates in the city’s 2010 CSO Plan (warning: 13MB file), the fixes for the Lake Washington shoreline in our area will cost $34 million dollars, reducing the annual overflow volume there by 75%. Those projects are scheduled for construction between 2018 and 2025, on a lower priority than other locations around the city due to a lower relative magnitude of the problem. That timeline has been extended since the last time we reported on the CSO issue earlier in the year.

Final approval of any rate increases will be decided in the city council, which is taking up the issue in a committee meeting on Tuesday. 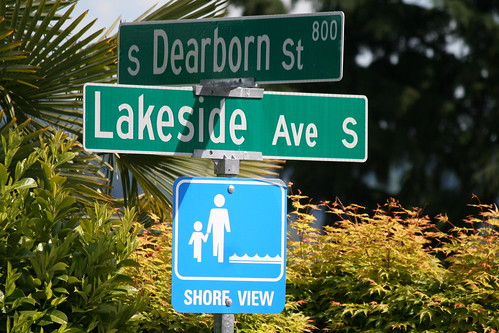