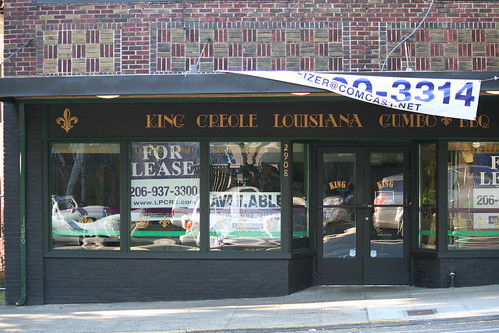 It was just a few weeks ago when some friends told us about the great meal they had picked up at King Creole Louisiana Gumbo & BBQ. Others really like it too – it accumulated 6 five-star reviews since we first wrote about it almost two years ago.

Last night Kedra of All Purpose Pizza (a CDNews advertiser) sent us a note that King Creole had closed and its building was up for lease.

Coming on the same day that Kedra announced the end of their new brunch service, she said it’s clear that the economy is still bad and seems to be getting worse. She said that while July is always a slow month in the restaurant business, this month is unusually bad, forcing her to cut employee hours to the bone.

Remember that your neighborhood businesses depend on people like you to keep going. If you don’t spend your dollars in the neighborhood, it’s very likely you’ll lose the opportunity to do so again in the future. So buy a pizza, get a coffee, and enjoy your summer cocktails here in the Central District instead of elsewhere.