SDOT unveiled a new piece of their system design at the International District festival this past weekend, showing two prospective locations of the streetcar maintenance and vehicle storage facility: 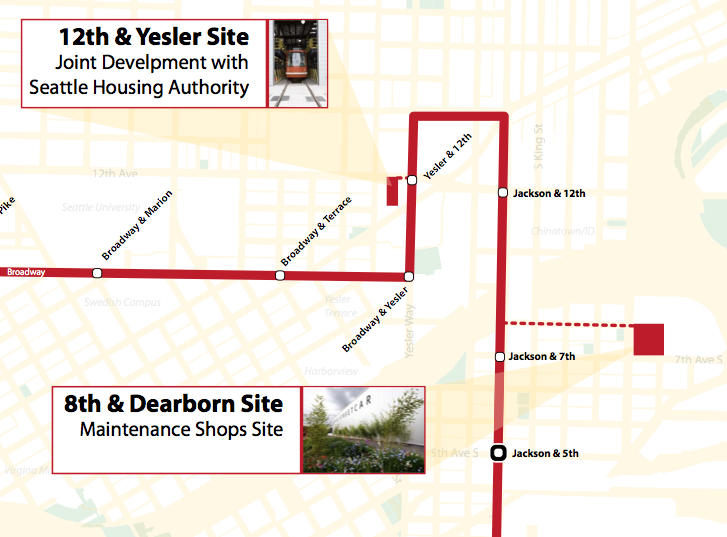 One location is on the existing city maintenance facility at 8th and Dearborn, and the second is on property owned by the Seattle Housing Authority at 12th & Yesler.

SHA program manager Anne Fiske Zuniga confirmed that option at the Squire Park Community Council meeting on Saturday, calling the potential partnership “very interesting.” That block will be one of the first pieces developed as part of the big Yesler Terrace redevelopment, using it to temporarily house Terrace residents who are displaced once construction starts on the larger part of the public housing site west of Boren.

Zuniga said that the streetcar project could take care of excavation work that the housing authority would have to do anyway, and that the roof of the maintenance facility could serve as central open space for the residents.

Key questions going forward will likely focus on how the maintenance facility interfaces with the street, and whether it would preclude the development of pedestrian-oriented retail on that end of the 12th Avenue neighborhood.

SDOT streetcar project manager Ethan Melone says that a final decision will be made this fall, and that “cost and compatibility with other planned uses at these sites will be key considerations.” Cost could weigh in favor of the 12th Avenue option, as the Dearborn site would require four new blocks of tracks to connect to the streetcar route, while the 12th Avenue location exists right next to the tracks and a deal with SHA could eliminate property acquisition costs that would have been incurred on other private parcels along the route.