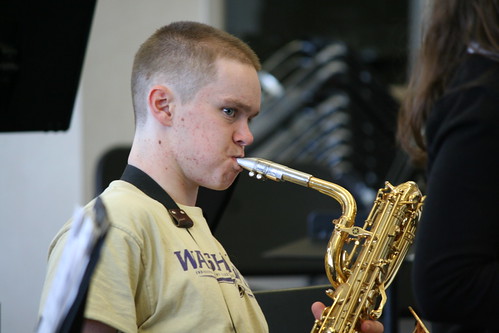 Just got an email from Seattle Center on a what could become a very hot ticket.  The concert is this upcoming Wednesday, and the ticket price — and where the money goes — seems just right.  Added bonus:  It’s at McCaw Hall.  From the release:

Two of the nation’s leading high school jazz bands have just returned from the 2010 Essentially Ellington Competition in New York. Garfield High School Jazz Band won first prize for the second year in a row, and Roosevelt High School Jazz Band received an honorable mention. You can hear both bands in concert, performing big band standards, including works by Duke Ellington, on Wednesday, June 9, 7:30pm at Marion Oliver McCaw Hall at Seattle Center. “Pay what you can” donations are requested – suggested donation of $20 at the door benefits Garfield and Roosevelt High School Music Programs and Seattle Center Foundation. This concert is sponsored by the City of Seattle, Seattle Center Foundation and 88 5 KPLU, NPR News and All That Jazz.