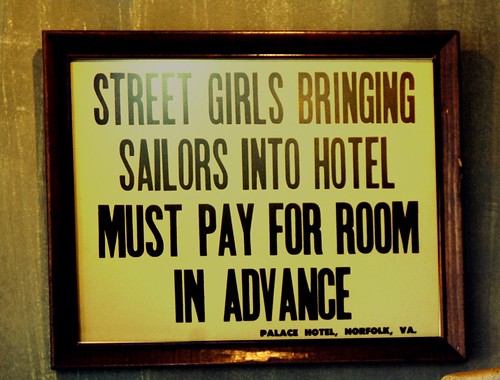 Erin Nestor, the owner of CDNews Sponsor Bottleneck Lounge, reports that the “Street Girls” sign that used to hang by the second bathroom was stolen between 5 pm on June 7th and 12:30 a.m on June 8th.  Here are the details from Nestor:

It was firmly secured to the wall by our second bathroom, where it has been displayed since we expanded the bar last August.  The sign is small enough (approximately 14” by 10”) that it could be slipped into someone’s bike messenger bag or under a coat and walked out of the bar (quickly) without drawing the bartender’s attention.

Last Monday was rather slow and as such I’m confident that we’ll get to the bottom of this.  In the interim, through twitter and our facebook page (check it out as there are a couple of good comments) we’re asking for its return.  If someone walks in by tomorrow and simply hands us the sign – we’ll ask no questions nor will we assume that the messenger is the guilty party.

When you own a bar you become accustomed to the occasional ‘removal’ of petty items – we’ve never been able to keep PBR glasses in stock, our Irish flags fly out the door during St. Patrick’s Day and I won’t even go into the constant disappearance of the Peroni glassware.  I can chalk that up to the cost of doing business.  But the removal of a framed item from our very wall irks me – we purchased it from a friend of Rachel Maxi’s about six months after we opened – it was a great garage sale ‘find,’ an item imbued with nostalgia, and it’s now a heartfelt loss.  I suspect that someone who has only visited our bar on rare occasions now has it hanging in his/her house.  And we want it back.

Last month, Cafe Char quietly shut its doors.  We contacted Endanchy Girma, Cafe Char’s owner and the owner of the 2314 East Madison building it is housed in, who explained the reasons for Cafe Char’s closure:

After trying so many different ways to keep the shop open, I just realized I do not have the time. I travel quite a bit so hiring someone to run it on my behalf is so difficult.  I am trying to lease it so someone with the experience to take over.   Theresa (the lady who opened the shop in March)  had to go to South Africa for family emergency.

Girma is currently seeking a tenant for the space.