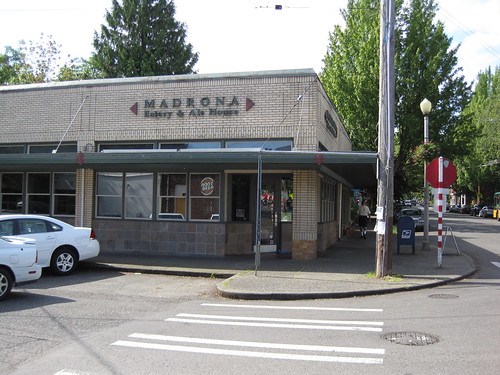 The Madrona Eatery & Ale House was one of two businesses targeted last Sunday morning in attempted break-ins on 34th Ave.

Police reports from June 13 detail two instances of forced entry at businesses on the 1100 block of Madrona on 34th Ave, between Spring and Union.

At around 1am, the burglar alarm went off at the Ale House when an unidentified person attempted to rip off the deadbolt and pry open the back door of the restaurant. An employee there confirmed there was some damage to the back door, but no one was able to enter the restaurant.

At 5:30am that same morning, a police officer on patrol reported the front window smashed at another business on the 1100 block in what appeared to be a successful burglary. We weren’t able to confirm which was the second storefront broken into, so let us know if you have any more details on what, if anything, was taken.

It’s not confirmed that the two incidents were related, though it seems likely, and local businesses were warned to be on the alert last week for potential property crime. We’ll keep an ear out for any developments or suspects.