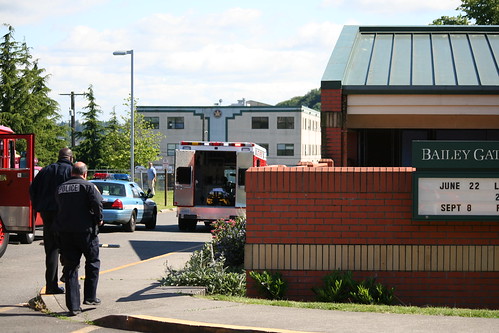 We’ve got a few new details on the stabbing of a 14 year-old last Friday at Bailey Gatzert elementary, courtesy of a newly released police report from the incident.

The report says that the dispute started between the suspect and another kid who had an earlier dispute that morning, and who “each spoke of continuing their dispute at another location after school.” That continuation happened shortly after 4pm outside Bailey Gatzert, and the stabbing victim was brought into the fight when he tried to intervene.

Punches were thrown, and the suspect produced a multi-tool with a two-inch blade that he used to cut the victim underneath the chin, leaving a 2-3″ laceration. The suspect also suffered a deep injury when the pliers on the tool clamped down on one of his fingers during the attack.

As we reported on Friday, police saw the suspect running away when they arrived and took him into custody. The police report says that the suspect was booked into the King Youth Services Center. Police could not reach his legal guardian at the time of the arrest.

Both the suspect and victim required stitches for their wounds.

Commenters raised questions last week about what kids of that age were doing at an elementary school. We’ve asked that question of Seattle Schools but have not yet heard back.