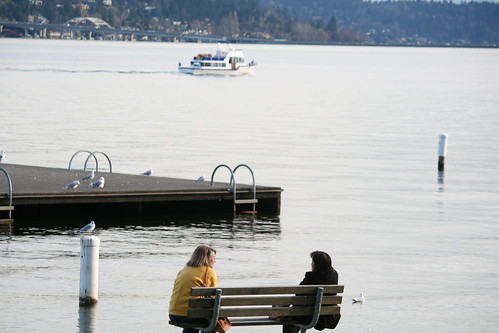 The May meeting of the Madrona Community Council last night was a long but fruitful one, as the council and attendees discussed proposals for allocating the funding provided by longtime Madrona residents Martin and Mimi Kraus for parks and recreation.

Mimi, who passed away in 2008 at the age of 98, left $50,000 in her will to be used to benefit park and/or recreation projects in Madrona. The April issue of Madrona News has a story written by two of the Krauses’ neighbors about the couple’s history and love of the outdoors, which conveys how important it was to them to sustain the outdoor spaces in the community.

At last night’s meeting, several proposals were presented, ranging from supporting ongoing projects like the Madrona Woods restoration, to revitalizing Madrona Beach, to adding an indoor bathroom and activities to the park shelter, to installing artwork at the playfield. The text of all the proposals will be posted on the council’s website shortly, and the council will vote to decide on the awarding of funds at next month’s meeting.

We’ll be sure to report how the money is allocated next month. Either way, it’s encouraging to know that one or more projects in Madrona will get a boost, especially given that the Seattle Parks Department is low on funding.