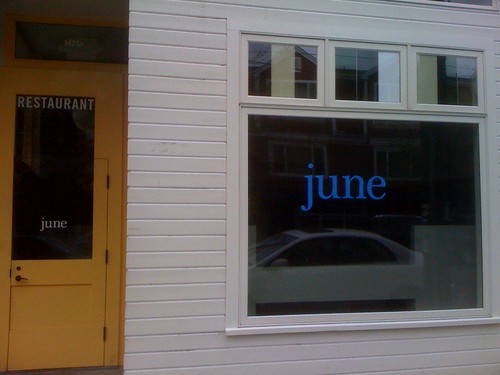 The name came from a tongue-in-cheek pronouncement, as a group of neighborhood friends hoisted drinks at what had become a monthly dinner out in Madrona.

“We’re the ‘Madrona Dining and Sipping Society’,” someone announced in a mock-snooty voice.

More than four years later, the name is official, though the group remains low key. Once a month, the members of the MD&SS meet at a neighborhood establishment to sample a pre-fixe menu, catch up with old friends and make new connections.

“There’s a cohesiveness that happens that’s bigger than just food,” says Audrey Seale, who has coordinated the dinners from the beginning.

The meals occur about 10 times a year – plus the annual summer barbeque at St. Therese’s – and the devotees have hit up pretty much every dining spot in the area at least once and often several times, including St. Clouds, Bistro Turkuaz, Dulces, Café Soleil, the former Cremant and some places further afield on Capitol Hill.

Next month’s event, which is already booked solid, is at newly-opened June.

“It’s a nice opportunity is to try out a restaurant,” Seale says, “and for the restaurants, they can count on a certain amount of business.”

In a departure from most Madrona events, which tend to be kid-friendly to a fault, the MD&SS is primarily child-free, though well-behaved teenagers are known to attend.

Those interested in getting on the mailing list for future events can contact Seale at [email protected]. There’s no website, logo or official newsletter – which, Seale says, should show other pocket neighborhoods that the success of the MD&SS can be easily replicated.

“All it takes is one person and an email list,” she says.