Today the 22nd Avenue blockwatch group sent us a new letter about the controversial felon housing project that has been proposed for a house on their block. The lengthly letter (attached at left) gives a fuller picture of why the group pulled out of the negotiations on the Good Neighbor Agreement, citing several key issues:

The blockwatch also takes issue with what they believe is an inappropriate injection of race into the discussion, saying that “the people most opposed to his project are older black residents who fear for their safety.” Having attended most of the meetings on this topic, we can confirm the controversy doesn’t fit into a stereotypical gentrifiers-vs-longtime-residents mold. The most outspoken residents have often been African Americans who have lived on the block for many years.

In spite of their stated misgivings, the blockwatch says they still want to talk to Reverend Jeffrey and “ensure that the project is well planned and operated.” They say that they’ve been trying to get State Senator Adam Kline involved, but that his calls to Reverend Jeffrey have not been returned.

We placed a call to Reverend Jeffrey to get his comment on the letter and involvement of Senator Kline, but have not yet heard back. 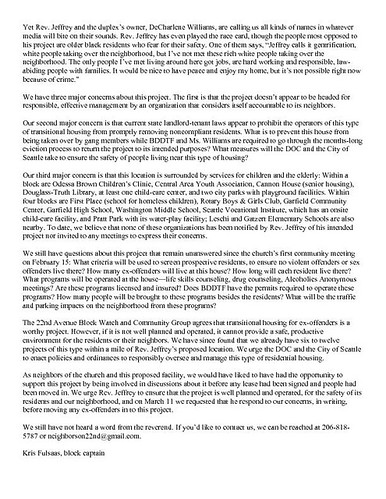