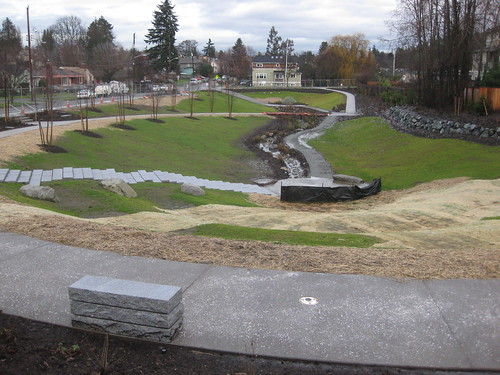 A year ago the stormwater detention pond at 30th & Denny was just a hole in the ground. But that hole needed to be bigger to prevent flooding, and the city worked with neighbors to make the project have a useful form in addition to its preventative function.

New walking paths have been added and substantial new landscaping has been taking root since the project was finished last fall. The paths follow a stream bed at the bottom of the hole that will help transport runoff from the south end to the drain at the north part of the property.

But the fences are still up around the perimeter of the site as the city waits for the rainy season to end and to make sure that users of the new park don’t damage the still-fragile plants.

Elaine Yeung from Seattle Public Utilities tells me that contractors will be back out at the site next week to do some touch-up work and re-seed the grass. If the schedule and weather cooperates, that should set it up for an opening to the public by the end of May.

That will leave one more bit of work when a public art installation will be added sometime in the fall.

0 thoughts on “Mad Valley pond to get spruced up soon, open by June”