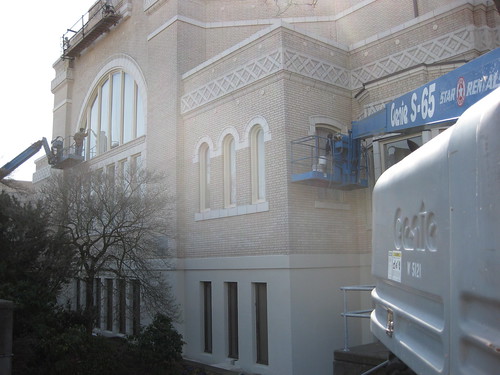 Seattle Parks and Recreation announced today that The Langston Hughes Performing Arts Center (LHPAC) building is closed through early Spring 2011 to accommodate planned seismic and electrical renovations.  LHPAC Center staff will continue to carry out programs and performances at other locations during the closure. To confirm new locations for all programs and performances, call Center staff at 206-684-4758 or visit the LHPAC Film Festival Website.

Here is the full explanation for the closure:

A 2008 study identified the need for seismic upgrades and additional electric power to the building. Other interior upgrades will enhance the 95-year-old building’s public amenities by providing improved restroom facilities, upgrades to the lobby floor and main entrance, upgrades to the theater sound and lighting booth, improvements to rehearsal and dance floors and improvements to theatrical dressing rooms. The primary space in the building is the theater space, which has a fixed seating capacity of 285. The lower level of the original building includes several small classrooms and a large activity hall that accommodates almost 300 people.

The 2008 Parks and Green Spaces Levy provides $2.5 million for the project; $449,000 comes from a State Building for the Arts grant; and $365,000 from the City’s major maintenance fund. For more information on the project, please see.

This historic building in Seattle’s Central Area at 104 17th Ave. S was formerly the Jewish Synagogue of Chevra Bikur Cholim. This commanding polygonal structure of tan brick with white terra cotta detailing, was designed by B. Marcus Priteca, a well known Seattle architect. It was dedicated in August 1915 and opened in 1916. The building is designated as a historic landmark subject to protection by city ordinance. The Langston Hughes Performing Arts Center was established in the building in 1969, and has worked closely with Seattle Parks and Recreation since 1972 to offer unique programs to the public.