Have you mailed in your census forms yet? If not, dig into your pile of old mail and fill it out. It’s totally painless and only takes a few minutes to complete.

Right now the Census Department shows that our area is running behind in getting the forms mailed in, with several tracts only in the 50% range, compared to 65% for the overall state of Washington. You have until Friday to mail the form and avoid having someone stop by in person to do the count manually.

In addition to making sure we get full representation in congress and our full share of federal funding, the census gives data nerds like us some fascinating stuff to dig through.

Until the early 60s, racist property covenants and red-lining practices of real-estate agents limited where African Americans could live in the city to the Central District, roughly bounded by Madison, Broadway, I-90, and 34th Avenue.

Here’s a map we found on the UW website that shows where African Americans lived in 1960, where each dot represents 25 people: 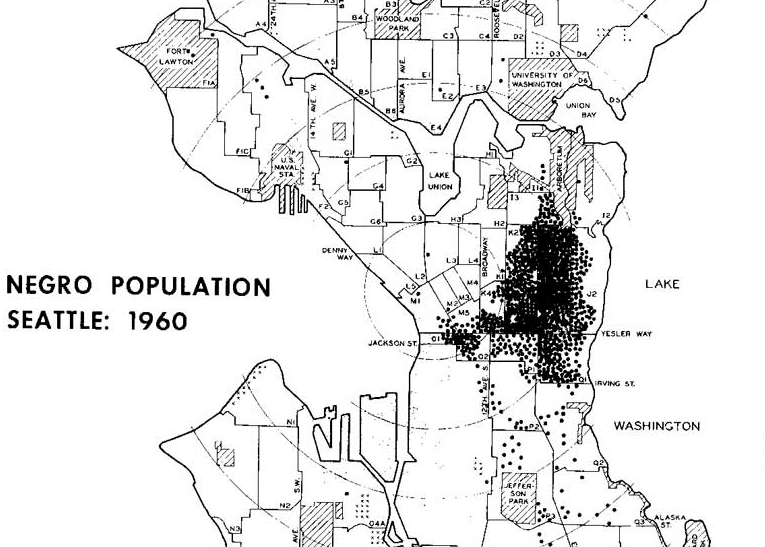 The data on small things is really interesting too. For example, in 1960 almost 10% of all homes in Washington State lacked complete plumbing. When we bought our house in the CD, I remember the plumber making the claim that 40% of all houses in the neighborhood still had outhouses in 1960. I found that very hard to believe, and we’ve dug up census data to prove the point. Out of the seven census tracts in the neighborhood only three had a significant number of homes without plumbing:

For more, here’s a map we put together where you can browse individual census tracts based on the data from the 1960 census: