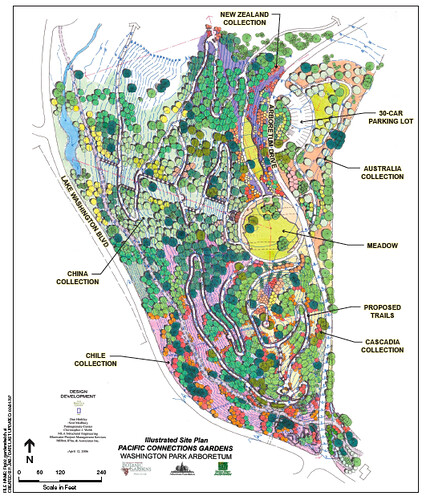 Karen O’Connor, the Senior Public Relations Specialist for Seattle Parks and Recreation, told us about a new addition to the Arboretum.  There is a guided tour available today at 5:30 and a public meeting for those interested next Tuesday March 16.  Here is what she told us about Pacific Connections Garden:

The Pacific Connections Garden is one of the key components of the Washington Park Arboretum’s 20-year Master Plan for renewal and marks the first major new exhibit in the Arboretum in almost 50 years. The 14-acre garden will be located at the south end of the Arboretum and feature five eco-geographic immersion forests surrounding a central welcoming meadow and a series of stunning entry gardens. The forests will be comprised of temperate-climate plant communities from Australia, New Zealand, China, Chile, and Cascadia.

Construction begins in late spring for the “Gateway to Chile.”  This is part of the second phase of the implementation of the Pacific Connections Garden.

Attached is the flyer with detail information.   We encourage you to come and learn about the upcoming improvements for the Washington Park Arboretum which include the removal of some native trees to make way for the planting of over 70 Chilean trees and the restoration of the overgrown Holmdahl Rockery. 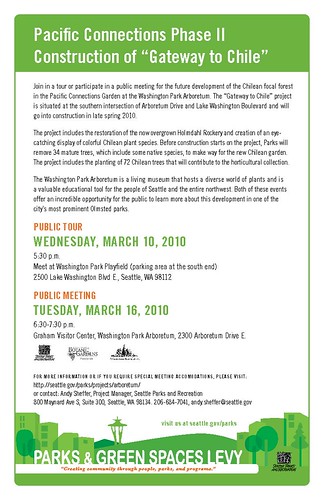