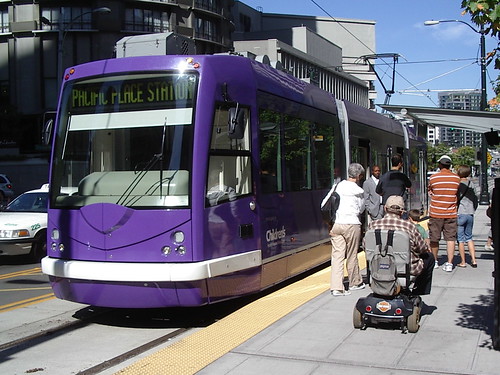 In 2013 there will be a new streetcar on First Hill, connecting the Capitol Hill light rail station to the International District light rail station. And it’s looking more and more like that streetcar will be traveling on Broadway, and not on 12th Avenue to the east or further west on the First Hill.

We’ve learned that on Wednesday the mayor held a meeting that included all of the interested parties around the project, such as the hospitals, Seattle U, and community council representatives. In that meeting the mayor revealed that the city Department of Transportation has made a recommendation in support of the Broadway route, and attendees at the meeting report that the mayor indicated that he was leaning towards the Broadway route as well.

We’ve made an inquiry to the mayor’s office to confirm this and get a better read of his position, but so far have not heard back.

As we reported last month, the Broadway route came out with the lowest overall cost and reasonably high ridership. Comparatively, the 12th Avenue route cost a bit more (but still within the project budget) and had a slightly lower range of estimated ridership. The twisting, turning western routes through First Hill exceeded the project budget, but provided slightly higher ridership potential.

The final decision on the route will be decided by the Seattle City Council, and it’s anticipated that their decision could come as soon as April.

Supporters of the 12th Avenue/Broadway couplet tell us that they’re still pulling for that option and will continue to try and gain the support of city leaders.

SDOT has recommended a two-way Broadway Ave alignment for the First Hill street car.  Earlier this week, Mayor McGinn hosted a meeting of First Hill and Capitol Hill stakeholders to hear their perspectives on the alignment options.  It was a productive and open conversation.  The Mayor is considering the SDOT recommendations and the input he heard from the community earlier this week and expects to send a proposed alignment to Council for their consideration within two weeks.

Here is the presentation that was given in the meeting earlier this week: