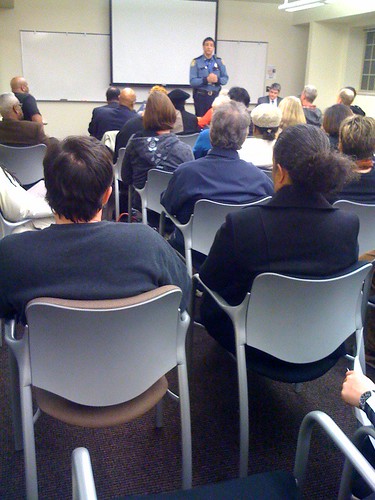 Over fifty Central District residents packed into a Seattle University class room last night to voice their concerns and (some) to support the 22nd Avenue Re-Entry House Project.  John Hayes, the Director of Community Relations for the Seattle Police Department, moderated the meeting.  Hayes reminded attendees that they should premise the discussion on the fact that the re-entry project will happen. The audience should focus on making the project mutually agreeable to the neighbors and its founders.  New Hope’s efforts are consistent with a national movement among historically black churches to deal with the problem of a shortage in offender reentry housing.

James Kenny, an Assistant Seattle City Attorney, spoke after Hayes and cautioned the assemblage that even if a good neighbor agreement is reached between Black Dollar Days Task Force and the 22nd Avenue Block Watch and Community Group, this would be a civil agreement between two parties.  In other words, the police and city prosecutors will not be responsible for enforcing the agreement.   Click thru the main photo at left for photos of the draft good neighbor agreement (I will update with a .pdf if Kenny sends me one).

Bill Wolfe from the Washington Department of Corrections then confirmed that Corrections would not have oversight of the 22nd Avenue House in its initial stages.  When pressed by an audience member for the reason, Bill Wolfe responded that the current project had “too many issues”.

The audience was then split into five smaller groups and charged with reviewing a draft good neighbor agreement (distributed by Kenny) and offering questions and/or issues as input.  Here are some issues that neighbors had regarding the re-entry house.  Some of the issues raised echo the concerns expressed in the 2/25 Letter to Reverend Jeffrey. 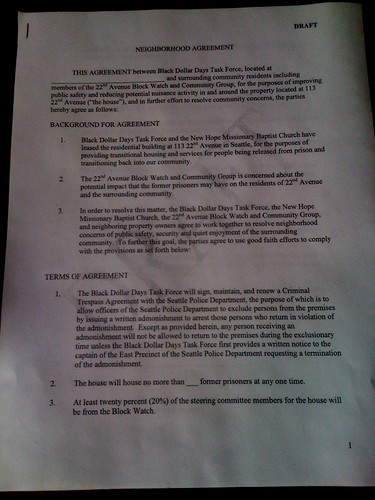 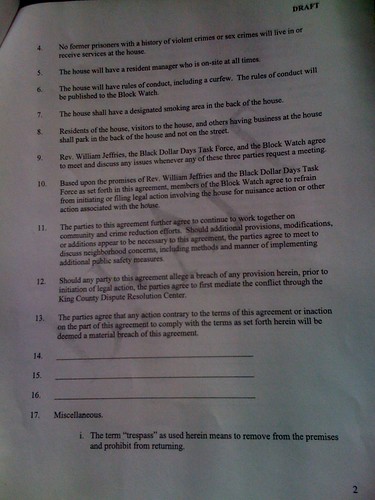 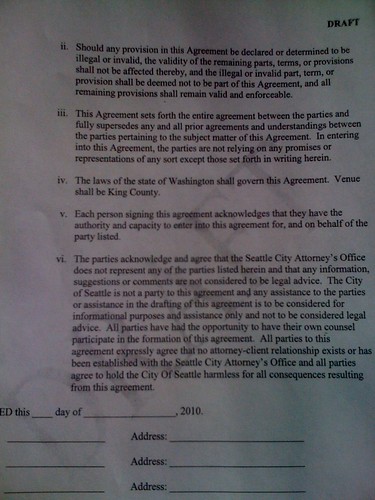