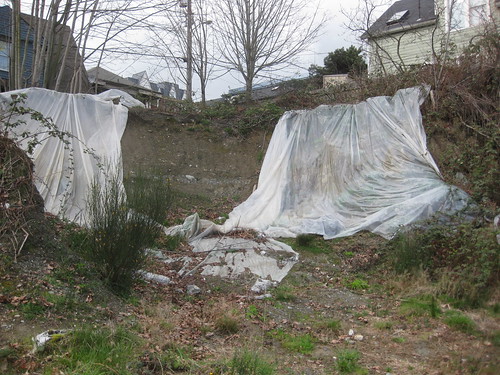 The plan for 18 loft-style apartments at 12th & Fir was one of the more ambitious projects of the real-estate bubble years. Now it’s shaping up to be the Central District’s poster-child of real-estate and banking woes, and how the resulting ownership confusion can leave us all with an unstable mess.

The property at 151 12th was purchased by PbElemental in late 2007 for $575,000 and the old auto shop that sat on it was demolished the next year. But the mixed-use project never made it past the first set of design reviews, and it was cancelled last year. PbElemental also defaulted on the bank loan that was used to purchase the property, the corner lot was taken over by Evergreen Bank.

But the empty lot was left in a state of disarray. The city cited it last year for an unstable, unretained slope along the back and side with no erosion control, putting neighboring properties at risk of damage. According to the citation (attached above), the city is requiring a geotechnical engineer to evaluate the site and for countermeasures to be designed and installed to prevent further problems.

And as the site has sat empty, it’s also become a target for dumping. Trash is piled up in various places, and old TV sets and computer monitors are broken and strewn about the property. Earlier in the year, Capitol Hill Housing, which owns other property along 12th, paid to have a junked car moved off the lot.

The story got more complicated in January, as Evergreen Bank was seized by the FDIC and sold to Umpqua Bank of Oregon, putting Umpqua in charge of the derelict property and any others that may have been a part of Evergreen’s load portfolio.

The site is currently incurring fines of $500 a day as long as the problems go unfixed. And after sending four notices to the owners about the violations, the city planning department has forwarded the case on to the city attorney’s office for legal action.

We made numerous attempts to contact PbElemental for comment on this story. A man who answered the phone there said he couldn’t speak to it, and attempts to reach a company executive were unsuccessful. 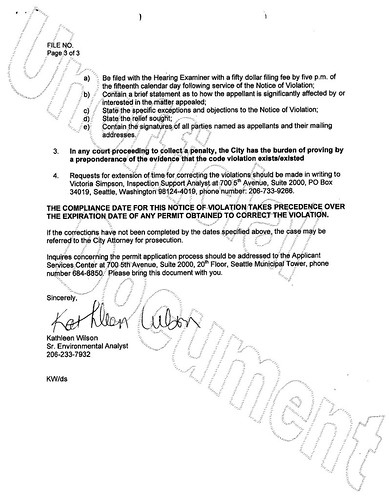 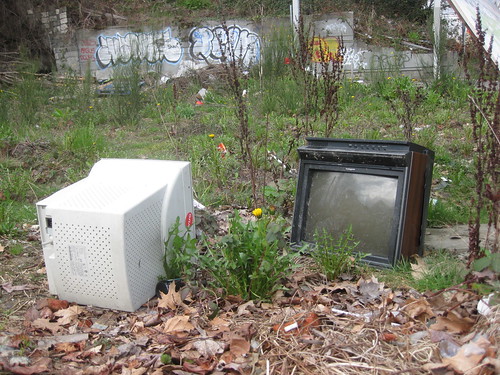