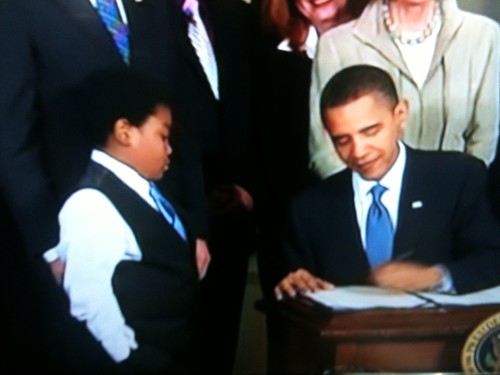 This morning President Obama is signing the first part of healthcare reform in front of a large audience in the East Room of the White House, and 11 year old Central District resident Marcelas Owens is in the audience and will be on the podium when the President’s leaves his signature on the legislation.

As we told you earlier in the month, Marcelas’s mother lacked health insurance and died of a treatable illness.

The President specifically mentioned Marcelas in his opening remarks, saying:

I’m signing it for 11 year old Marcelas Owens, who is also here. Marcelas lost his mom to an illness. She didn’t have insurance, and couldn’t afford the care she needed. So in her memory, he’s told his story across America so that no one else would have to go through what his family has experienced.

The next step in the healthcare saga is for the Senate to pass the reconciliation measure that contains various fixes and changes to the original legislation. That’s anticipated to happen late in the week, with the President signing the final piece into law before the end of the month.

0 thoughts on “Marcelas Owens at White House for healthcare signing”