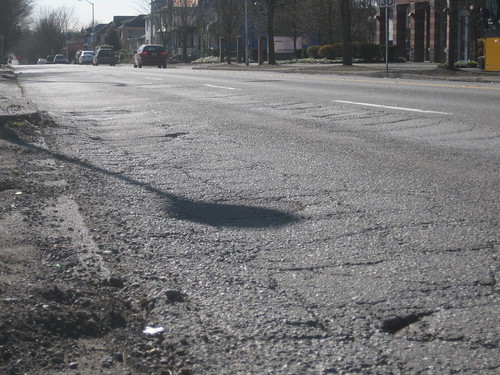 23rd Avenue will remain a bumpy ride even if it slims down a bit in 2012. According to the latest documents published on the SDOT website (pdf attached at left), the Central District’s major roadway isn’t scheduled to have its rough pavement repaired until 2015.

Stretching from Madison to Jackson Street, the project calls for the two center lanes to be ground down and repaved with asphalt, and the two outer lanes to be completely rebuilt from the ground up with new concrete.

A 2004 study of paving needs around the city identified 23rd as among the city arterials most in need of attention, receiving a score of Poor and total project cost of $868,396. Only 5.5% of streets at that time had a worse rating.

We made several requests to SDOT for more information what has driven the prioritization of the 23rd Avenue project, but have not yet received a response. We’ll give you an update if we do.

Update: We just spoke to Richard Sheridan, spokesperson for SDOT, who explained that the 23rd Ave project is prioritized based on a number of factors, and that the current roadway condition is only one of those. They use a formula that takes into account geographic diversity, project cost, traffic volumes and uses, and opportunities to coordinate with utility work.

One factor going against 23rd is the size of the project. It requires a full rebuild of the roadway from the ground up, and will cost $8.6 million. That represents 100% of the paving budget for 2015, and 23rd is the only project scheduled for work during that year.

To take an example of another roadway, 85th NW in the north end is of similar size and quality as 23rd. However, it carries substantially more traffic at 25,000 vehicles per day, compared to 15,000 a day on 23rd. And it requires much less work, with only a grinding down of the pavement and application of new asphalt on top. Thus, is gets a higher priority and will be repaved in 2012.

0 thoughts on “23rd Ave to stay rough for years – Updated”