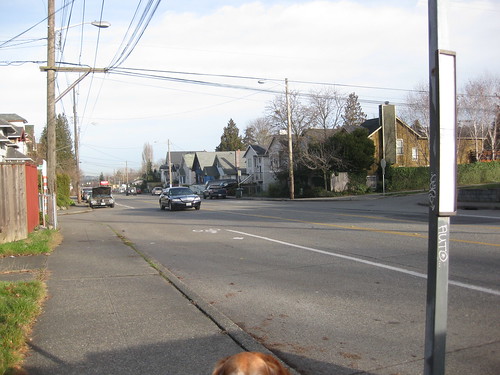 The new crosswalk at MLK & Marion that we told you about last month will soon become a reality. Jim Curtin, community liaison in the city’s Department of Transportation, tells us that construction is scheduled to begin in early April.

The project was scaled back a bit from neighbor Anne Landfield’s original application, with elimination of the proposed curb bulbs that would have shortened the distance required to cross the street. The final design includes a painted crosswalk across the north edge of the intersection, with a concrete island in the median to give pedestrians a small shelter between the travel lanes. Signage will also be added around the new crossing.

The median island will be similar to the one added last year at MLK & Jefferson, which drew some cautionary comments from a neighbor at a community meeting last week. She pointed out that the island there has its waist-high orange sign knocked off several times per month by passing traffic.