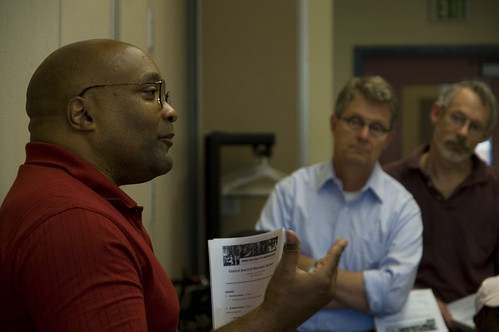 About 40 people attended, with a majority coming from the central district, to discuss and gain community feedback on the 10-year-old neighborhood plans. This meeting was a special effort to confirm the community’s involvement, but David Goldberg from DPD explained that this is only a step to a plan update, as only a few neighborhood plans will qualify under the undetermined criteria for updating.

Those of you who took the city’s online neighborhood survey might recognize those — they’re the same questions the city asked on the Internet.

For Central Area, the immediate concern was the clumping of three different urban villages, Madison-Miller, 12th Ave., and 23rd & Union Jackson, despite differences in opinion within those communities and the separation of Pike/Pine from Capitol hill. While not complete, here is a summary of what was said at the meeting at the Central Area table lead by Adrienne Bailey.