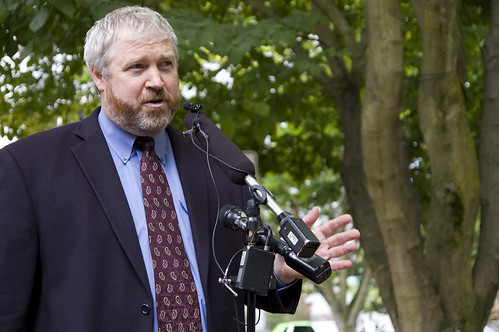 Tuesday morning in First Hill Park, Mayoral candidate Mike McGinn formally announced his support of a First Hill street car. This is one of the first punches thrown in this election series, with McGinn responding to Mallahan’s “inefficient use of taxpayer money” approach to street cars. “It shows a difference in values and a difference in vision for the city of seattle,” said McGinn. Voters have already approved the funds for the First Hill street car through primarily a sales tax increase.

We’ve spent a lot of time on CDNews talking about the street car and its possible routes, such as the 12th Ave. route that hopes to revitalize that area that borders the Central District and First Hill. When asked about this route, he expressed the need to stay the course, and let the communities decide the route and did not commit to any particular alignment. McGinn’s vision for the First Hill street car was focused around separating it from traffic, making sure it had the right of way and was the quickest choice of transportation in that area. McGinn continued, saying that this was the major downfall of the South Lake Union street car. He was open to considering a street car on First Ave. as well as connecting street car routes, but said emphasized the need to choose the “right tool” for any new transit investment.

Responding directly to Mallahan’s issue of cost, McGinn alluded back to his opposition to the deep bore tunnel, saying the First Hill street car is already fully funded with a stable financing mechanism, while the tunnel is not. Also regarding the tunnel, McGinn brought up the fact that Mallahan supports an issue that “70% of voters disapprove of” yet does not support the street car with “70% voter approval,” and mentioned this Times article as a direct example of cost overrun possibilities in tunnel construction.

McGinn claimed he had originally called the conference to join in support for the First Hill street car, but was “surprised” when Mallahan expressed his opposition. “When the voters vote for something, and fund it, we should build it. Mr. Mallahan does not seem to think that is the case,” said McGinn.