Our friends at Capitol Hill Seattle spent a lot of time crunching numbers on contributions during the recent primary campaign. It turns out that the combination of zipcodes 98102, 98112, and 98122 is second in the city for contributions, behind only the big money Downtown. In total, our area has donated $322,760 during the current campaign cycle.

(Remember: Today is your last chance to vote. Get your ballot to the post office by 6pm or to the Neighborhood Service Center at 23rd & Jackson by 8pm).

We also came in first for contributions to support the bag tax, and all anti-bag-tax money came from out of town: 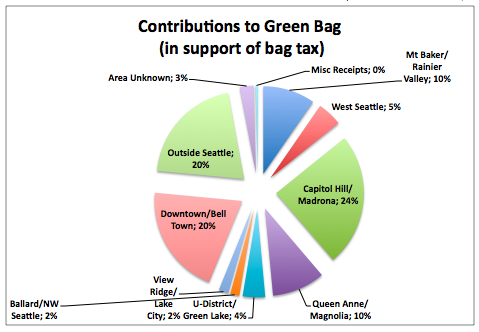 And our contributions to the Mayor’s race pretty much follows the city pattern. People in our zipcodes gave the following amounts to the major candidates:

Check out Justin’s post for lots of other interesting details, and make sure you get your ballot in to be counted!

0 thoughts on “Our area near top of candidate contributions”