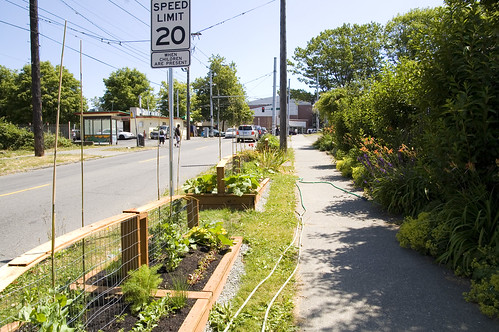 Seattle is full of area markets and huge amounts of fresh, local produce. But for some, the satisfaction of eating great, sustainable food is not enough. For the third installment of urban agriculture in the Central District, CDNews visited the home of Dana Belkhom and Jude Ovalles. Over the last 9 years, Dana and Jude have created a monster garden that nearly engulfs their Jefferson Street home. Dana has even pulled out less than average plants to make room for more quality flowers. But their latest investment was the most intriguing part about Dana and Jude’s garden. This year, they purchased and set up three 12 ft. planters outside of their fences, in the parking strip just past the sidewalk.

“It’s been a great spring for it,” says Dana. Despite an in increase water usage, he has had great success with the huge variety of plants that are in the planter. Tomatoes, green beans, beets, Bok Choy, eggplant, basil, sage, zucchini, pumpkins; even watermelons. Dana and Jude generally use their crops for personal use, but the public space of the parking strip may lead to some “borrowers”. They weren’t too concerned with people walking by and taking a cherry tomato, but “we just don’t want people using it as their grocery store,” said Jude.

Originally, Dana shied away from parking strip planters. “They just recently eased restrictions on planting. No more inspections. The new rules make sense,” says Dana. The department of transportation encourages planting anything besides certain trees in the parking strip, but using raised planters similar to Dana’s and Jude’s requires a free street use permit. Most restrictions on this sort of planting deal with how much space the plants take up, as a safety precaution. Depending on the wood used in the planters and the type of crops you plant, start-up cost can be anywhere from $50 to $300. Maintenance, as with any other type of garden, is usually limited to watering once a day and weeding once a week.

The full text of the planting strip law can be found here.

0 thoughts on “Urban Agriculture: Making good use of public space”