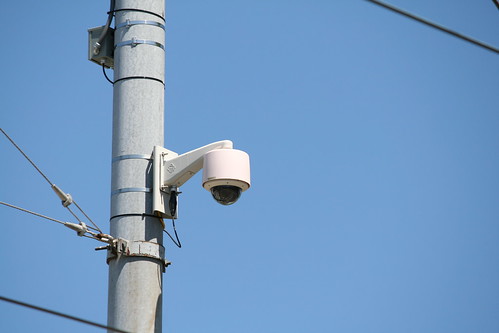 Last week we told you about the new surveillance cameras that the city has put up around the Garfield Community Center. Since then we’ve been able to get a few more details on the installation and how it has been funded.

According to Parks Department spokesperson Dewey Potter, the cameras were installed to provide security for people around the community center. The total cost was $90,407, sourced from a Parks capital fund that is designed to improve security and add lighting in the city’s park facilities.

There was a big controversy last year when cameras were added to Cal Anderson Park without a specific appropriation by the city council. I spoke to a staff person in Councilmember Rasmussen’s office who said that while that was eventually worked out between the mayor’s office and the council, more recent budgeting woes prompted the council to take away the surveillance camera money and apply it to other needs. She wasn’t aware of this more recent installation and couldn’t immediately say whether it complied with the council’s budget requirements.

A few more details on the installation:

The cameras seem to be popular with residents so far, with only 6% of respondents expressing disapproval in our unscientific online poll. Many commenters on the original story asked whether they could get cameras at other locations around the neighborhood. According to the parks spokesperson, there are no plans to add additional cameras anywhere else in the Central District.

I’ll be on KUOW at around 12:45pm to talk about the camera issue. Tune in!