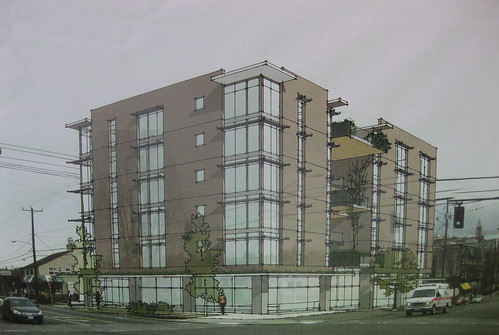 The state budget deficit is having an impact on Capitol Hill Housing’s plans to build affordable apartments on the vacant lot at 12th & Jefferson. The non-profit developers depend on a range of public funds to construct new buildings that are affordable to people making $34,000 and below, and one of the biggest components of that funding comes from the Washington State Housing Trust. But that state fund will be cut in half in 2010 due to the state budget deficit, and there likely won’t be enough to complete a full package for the new building at 12th & Jefferson.

If the project is going to happen any time soon, it requires Capitol Hill Housing to get their funding applications in this year so that they can tap the fully-funded 2009 trust instead. But that schedule runs up against another element of the project: they’re seeking a rezone to allow two extra floors in the building to make the long-term operational costs pencil out. Rezones typically take a year or more to complete, which will be too late to get the public funds that are available this year.

The staff at Capitol Hill Housing has come up with a possible solution. Last year the council approved changes to the development code that gives developers two floors of additional height if the project incorporates affordable units. But even though this project is all affordable apartments, it doesn’t qualify because the code was written to only make that bonus available to for-profit developers.

Opening up that process to non-profit developers like Capitol Hill Housing would require specific action from the city council. And getting that done in time to support a fall funding application would likely require a good deal of community support behind the project.

So if you’d like to see a new building take the place of the vacant lot at that corner, you’ll want to make your desire known to our city leaders. The best place to start is Councilmember Sally Clark, who heads up the Land Use Committee.

0 thoughts on “Want Affordable Apts. at 12th & Jeff? It May Require a Push”