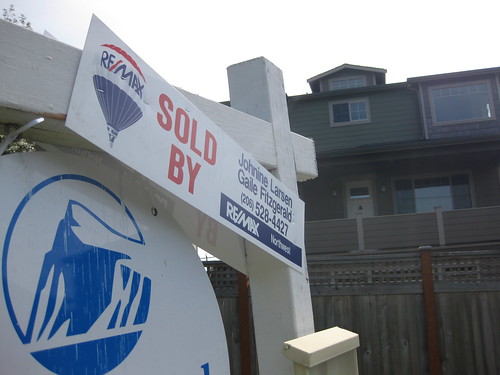 Way back in January of 2008 we started to follow three mega-priced homes that seemed to have foreshadowed the peak of the Central District real-estate market. One and a half years later and more than two years after first hitting the market, one of them has finally sold.

The home at 820 21st Ave was new construction that had taken over a vacant lot. But its original price of $879,000 was evidently too much for buyers to stomach. A big discount on that price seems to have brought it back down to reality, as a “Sold” sign went up on it last month and on June 5th a sale finally closed for $635,000 (a $244,000 discount off the original price).

As for the other two homes we covered in that 2008 story, the heavily remodeled house next door at 824 21st Ave sold in December for $325,000 (a whopping $318,000 discount off its original price), and the formerly million dollar house at 2315 E. Columbia is still on the market for $649,950 after going through a foreclosure auction at the beginning of this year.

Many thanks to site sponsor and local real-estate pro Mark Petrak for helping me research this story.