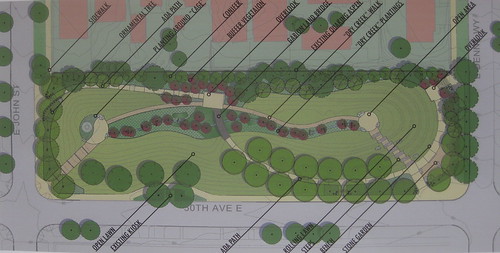 Tonight representatives from Seattle Public Utilities updated Madison Valley neighbors about the impending project that will expand the storm water detention pond there by 70%. Construction on the project will start very soon, possibly as soon as next Monday. A precise date will be fixed at a pre-construction meeting between the city and the contractor later this week.

The project is designed to increase the size of the emergency detention pond at 30th & Denny up to 1.7 million gallons, which officials say will reduce the likelihood of area homes being flooded during major winter storms. Efforts have been underway to provide an additional buffer since Kate Fleming drowned in her basement during the flash flood in December of 2006.

This part of the project is an incremental expansion of an existing system that allows storm water to back up in a controlled way when inflows reach a point that would begin to overwhelm the capacity of the sewer system. Accumulated water then drains back out of the pond as demand on the rest of the sewer system returns back to normal.

In addition to the expanded holding capacity, the city plans to make major upgrades to the landscaping and other amenities around the pond as an attempt to make it something more than just a grassy hole in the ground. Those plans call for additional walking paths through the bottom of the pond along what will be designed as a dry creek bed. The walls of the pond will also be restructured to add terraces, and the south end of property will get a sand play area and water feature for kids.

Officials say that construction activity can be expected any time between 7:30am and 6:00pm. On-street parking will be restricted in some areas around the property, and neighbors should expect dust, noise, and more than one-hundred dump truck trips as soil is dug up and hauled away.

The city’s construction contract calls for a maximum project duration of 90 working days, with a goal of having the project finished and grass re-grown before the rainy season starts again late in the fall.

This is also only phase one of the larger storm water project in that area. Phase two is scheduled to begin next year, and will provide a large new storm-water pipe along 27th & 28th Avenues, leading to a new underground detention tank near the play fields in the Arboretum.

Completion of both projects should reduce the likelihood of flooding down to only major storms that would be expected every 200 years or so.

Any neighbors who run into issues with the construction are told to contact project engineer Cynthia Blazina at (206) 423-1474.