The filing deadline for this Fall’s election was Friday, and the Primary is on August 18th.  An article in the Seattle Times has lists of the candidates.  The legislature changed the date of the primary last year (used to be in September)  – it’s going to be awkward organizing a candidate forum during the Summer. The City Neighborhood Council is having a City Council Candidate Night on June 18th (flyer attached): you get to question the candidates one-on-one (if you and they turn up early) but not during the forum.

Question: do we want to organize a neighborhood-wide candidate forum sometime before the Primary? Let me know ([email protected] and/or via comments here) if you’re a) interested and/or b) willing to help organize it. Any thoughts on a joint CD/ Capitol Hill Candidate Night?

Incumbent Mary Bass, who represents Central Seattle, has three challengers: Joanna Cullen, a self-employed writer and editor and 2001-03 president of the Seattle Council PTSA; Andre Helmstetter, co-owner of MezzaLuna Bistro and parent who protested the decision to close T.T. Minor Elementary; and Kay Smith-Blum, co-owner of Butch Blum clothing store and organizer of a large 2004 fundraiser for school music programs.

Seattle Mayor Greg Nickels seeks a third term, his challengers include a longtime City Council ally, a former Sonic, and a cellphone executive who has put $200,000 of his own money into the race.

Remember that the incumbent (Paul Schell) was eliminated in the 2001 Primary.

(all excerpts from Seattle Times article) 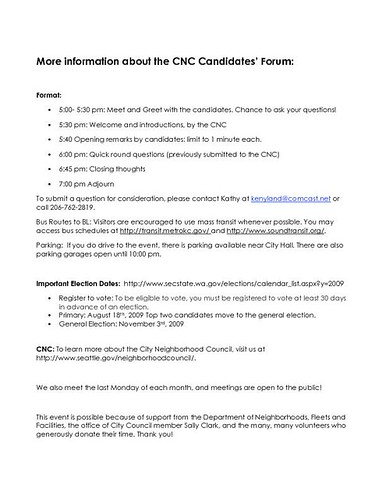 0 thoughts on “Elections! Do we want a CD Candidates Forum?”