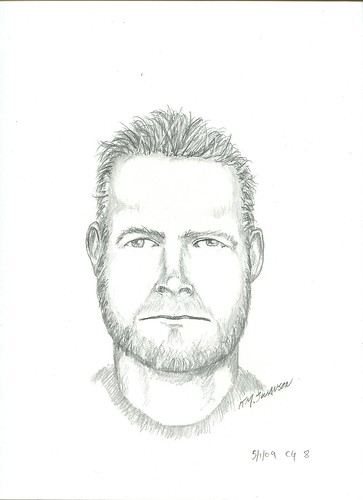 Today Seattle Police released a sketch of a suspect in a sexual assault case and asked for the public’s help in identifying him.

The incident began downtown on April 28th at about 9pm when the suspect boarded the #7 bus that the victim was riding on. When she got off the bus at Rainier Ave & S. Charles, St, he followed her and sexually assaulted her in the 900 block of Hiawatha Place.

Police describe the man as:

A white male, in his early 30’s, but could possibly be in his late 20’s.  He is described as 5’10″-6’0″ in height, with a medium build.  He has dirty blond hair and a beard.  He was wearing a dark colored hooded sweatshirt, possibly dark green, and had a lanyard, with something plastic, possibly a bus pass, attached to it, around his neck.  The suspect was also carrying a large backpack with a bedroll or a sleeping bag attached to it.

Anyone with any information on the crime or the suspect should call the SPD Sexual Assault Unit at 206-684-5575.