Although Seattle has big plans for a larger network of streetcars in the city, only one of the routes has definite funding. Last November’s voter-approved expansion of Sound Transit included funds for the capital and operational costs of a streetcar route to connect the International District and Capitol Hill light rail stations with the major employers and residents around First Hill.

And while funding is available, one crucial detail has yet to be decided: the exact route. Some key interests on First Hill have been lobbying the city for a westerly course that curves around via Boren & E. Madison. But for the last several months a group of neighbors, non-profits, institutions, and bloggers (i.e. me) have been discussing the various options and have coalesced around the idea that the biggest long-term opportunity for the streetcar is on the east side of First Hill. The thinking is that the east side has a lot of jobs, residents, and potential for future growth and development, but very few existing transit options.  In contrast, the west side of First Hill has a lot of quick bus connections to and from downtown and is largely developed, limiting the potential for a streetcar to attract additional future ridership or new pedestrian-oriented development.

The 12th Ave route directly serves the front of Seattle University and provides access to major employers such as Swedish Cherry Hill, Swedish First Hill, and the King County Juvenile Justice center. Plus it could be the catalyst for a new generation of pedestrian-oriented development along the southern portion of 12th: 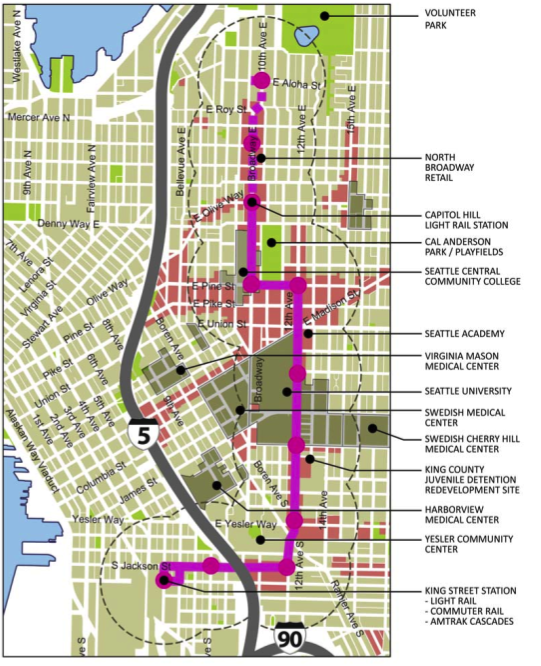 The loop route attempts to expand the total reach of the streetcar by serving two major north/south streets, putting more residents and employees within walking distance of a streetcar stop, and thus a short ride away from a light rail connection: 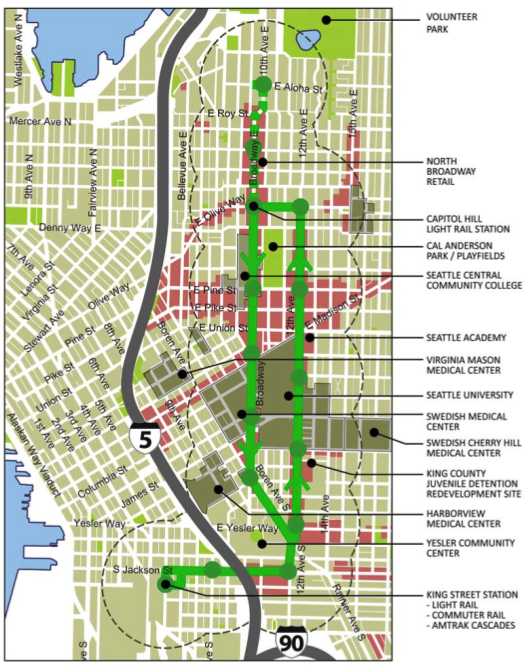 In a letter to Mayor Nickels last month, Seattle University President Stephen Sundborg asked that a 12th Ave route be studied as an option for the new streetcar. Another interested party is the non-profit Capitol Hill Housing group which is planning several low-income apartment projects along 12th.

At a First Hill community meeting last night, Seattle Department of Transportation project manager Ethan Melone said that the next big step in the project is to finalize an agreement between Sound Transit, who is funding the project, and the city, which will build and operate the streetcar. They hope to get that final agreement in June, at which point the city and its consultants will start to analyze the details of the different alignment options.

Mr. Melone says that the biggest factors in the alignment choice are:

The city will hold a round of public meetings later in the summer to collect citizen comments on the project. Once a final alignment is chosen, the city hopes to start construction as soon as 2010, with a start of service in 2012.  That schedule is dependent on an accelerated delivery of funding from Sound Transit.