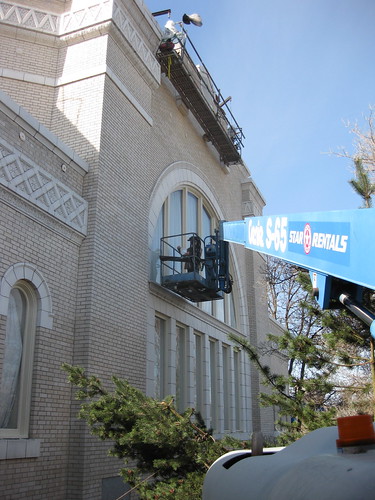 City contractors have been working on the exterior of the Langston Hughes Performing Arts Center at 17th & Yesler. The work includes refurbishing some of the terra cotta detailing and repainting wood trim around the doors and windows. Joelle Ligon from Seattle Parks tells me that this is routine maintenance, and not part of the new Parks Levy that voters approved last November.

The big $2.5 million levy project will start next year, and will include seismic and electrical upgrades to the 94 year old former synagogue. That work will take about a year to complete, and during that time the programs at Langston Hughes will be moved to a TBD temporary facility.

This weekend Langston Hughes will be hosting Fighting Water “All-Terrain Dance” from DASSdance.

The property at 17th & Yesler was purchased by the orthodox Bikur Cholim congregation in 1909, and the terra cotta synagogue was dedicated on that spot in 1915. After World War II, many members of the congregation began to relocate down to Seward Park. The group purchased property there in 1966, and a new synagogue was dedicated in that neighborhood in 1972. The Langston Hughes arts programs began in 1969 as part of an urban renewal program, and became a Parks & Recreation program in 1972.