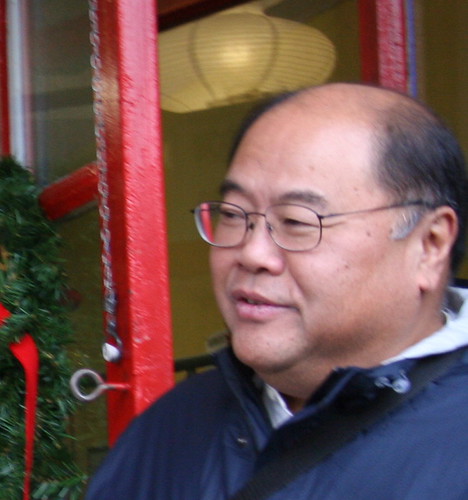 Some of the biggest news from last night’s EPCPC meeting was that Mike Yasutake is being laid off from the department. If you don’t know that name, you’d probably recognize the face. He’s the cheerful and helpful guy that serves as the Crime Prevention Coordinator in the East Precinct, working as a bridge between the police department and the neighborhood to nip crime in the bud.

For example, during the burglary spree last summer, Mike would teach people simple things they could to to avoid becoming victims.  He was also the go-to-guy for personal safety, teaching people people how to protect themselves from street crime.  It was all great, long-term, very positive stuff.

I learned during our walk with the Mayor last year that this was more than a job for him. He actually grew up here in the CD near Jackson St. and graduated from Garfield High School, so he understood the community and its needs.

But evidently now he’s gone, which I was able to confirm with SPD spokeswoman Renee Witt this morning.  She referred further questions to the Mayor’s office, which hasn’t responded yet to our questions.

The most interesting part of this is that according to folks at the meeting last night, he was the only coordinator to be let go out of all the other precincts in the city.  North, South, West, Southwest all get to keep theirs. But evidently Mike had the lowest seniority, so the East Precinct loses out. The plan moving forward is for the East Precinct to “share” coordinators with the West and North precincts.

If you’re upset about this, it was suggested that you speak out to the mayor and the chief of police.

We’ll update this if we learn anything more from the mayor’s office.

0 thoughts on “Mike Yasutake Laid Off, Only E. Precinct Hit”