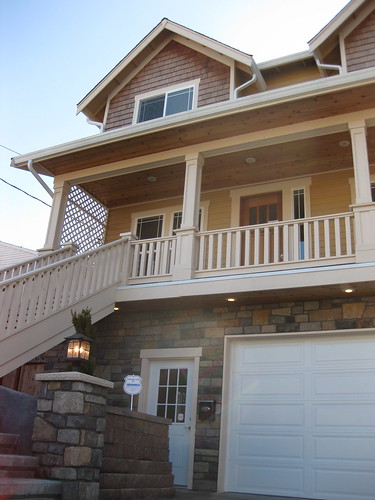 We’ve talked a lot about the $1 million house in the CD because it always seemed to be a good example of the irrational exuberance of the local real estate market. But since it sold at a foreclosure auction in January, we’ve been going through property records that also make it look like a good local example of the national mortgage mess that has been taking down our economy.

Three years ago, this property in the 2300 block of E. Columbia was a small one-story rental with a flat roof. But in April of 2006, the long-time owners sold it for the relatively modest sum of $185,000.

Just two months later, the property sold again for $300,500 to a small local home builder. The purchase was financed with a $640,000 construction loan from the First Independent Mortgage Company, and soon the small existing structure was demolished and construction started on a much larger 3,850 sq. ft. home. The new house was completed in the spring of 2007 and put on the market for an amount just shy of $1,000,000.

On May 7th of 2007, the builder replaced the original construction loan with a new adjustable-rate WAMU home loan for $660,000, taken in his name.  Note that according to public documents we got from the county, a provision of that loan was that the borrower would occupy and use the home as his primary residence for at least one year. I talked to a neighbor near the property who confirmed that the home has never been occupied by anyone, and I know from personal experience that the property was offered for sale throughout the term of that mortgage. The only way that would not be mortgage fraud is if WAMU had granted the builder an exemption in writing. There is no record of any such exemption in the county’s files on the property.

On June 22nd of 2007, the builder went back to WAMU for some more cash, this time taking out a $239,900 home equity loan. Although there’s no information on how those funds were used, the property on E. Columbia was complete and no other major work was seen on it after that point. But now WAMU was at a pretty large risk, assuming that an unoccupied mega-house in the CD was worth almost $900k.

For the next 15 months the home stayed on the market, seeing a few minor downward adjustments in price but no buyers. But evidently during that time the builder was starting to fall behind on payments for the WAMU mortgage. According to public documents, by September 30th, 2008 he had fallen $13,341.25 behind on monthly payments, and the principal balance on the mortgage had actually risen to $673,668.

The builder was never able to get current on the loan, and the property went to foreclosure auction on January 2nd of this year, selling for $500,000 cash to the current owner.  It is now back on the market for $695,000.

Counting only the original mortgage and the equity loan, WAMU lost almost $400,000 on the house.  That doesn’t include the large transaction fees that go along with a foreclosure and auction. Multiply that by thousands of similarly bad lending decisions across the country and you can see how it could be enough to bring down a large bank.

We tried to contact the builder for comment on this story, but were unable to find a working phone number for him.

The interesting thing for me with this story is how it diverges from what many of us assume is the main story line of the mortgage mess: people who bought too much house and got saddled with new-fangled interest-only mortgages that soon became unaffordable. But I wonder how much of the problem is actually similar to this one: small-time real-estate developers and speculators who combined a lot of bad business bets with a bit of fraud and ended up bringing everything else down around them.

0 thoughts on “A Local Example of the Mortgage Mess”