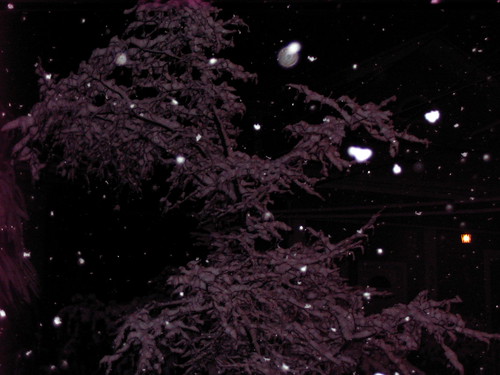 I stepped away for a few minutes to catch up on some household cleaning (bathtub! fun!), and came back to find snow falling and an accumulation starting on the ground.

The good news is that awesome weather-blogger Cliff Mass says that this should all turn to rain before the end of the night.  Let’s hope that’s true and that the first real workday of 2009 can proceed without a new layer of snow to foul up the commute.

We’ll update this thread with further snow news as events warrant and as our snow-weary selves can muster.

Update: 8:25pm – It’s still snowing big fluffy flakes here at world HQ, with about 2 inches accumulated on the ground. The snow on the tree limbs is really gorgeous.

Update: 10:30pm – Although the snow was predicted to stop by 10pm, it’s still coming strong here at CDNews World HQ.  There’s about 3 inches on the ground with slush on the flat arterials such as 23rd Ave.  Commenters report cars having problems now on the hills.  Metro is already cutting back on some bus service, with the #27 only going as far east as 23rd and the #2 on its adverse weather route approaching downtown.  Other routes are way off schedule, with the #48 at least 25 minutes behind and no info for the #3 or #4.

Update: 12:44am – The snow has stopped and the major streets are starting to clear.  Pavement is visible again in most spots on 23rd Ave.  Metro has further altered some local routes, with the most notable changes to the #3 & #4, which will get to and from downtown via Jackson instead of James, using Broadway in between.  This obviously leaves off Harborview so you’ll want to get off on Broadway if that’s your destination.  Not sure if those changes will hold for the morning commute or not.

Tune in tomorrow morning and we’ll let you know how the commute is shaping up.