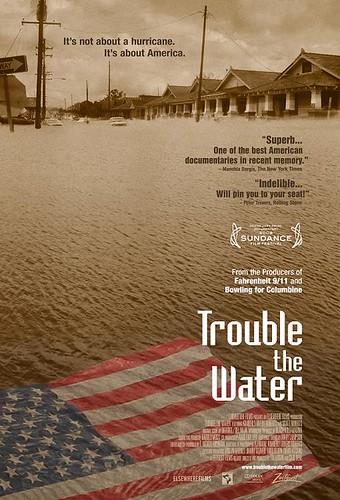 Langston Hughes’ Underground Railroad Film Series is proud to bring the Winner of the Grand Jury Prize at the 2008 Sundance Film Festival. This astonishingly powerful documentary is at once horrifying and exhilarating. Directed and produced by Fahrenheit 9/11 and Bowling for Columbine producers Tia Lessin and Carl Deal, Trouble the Water takes you inside Hurricane Katrina in a way never before seen on screen. The film opens the day before the storm makes landfall—just blocks away from the French Quarter but far from the New Orleans that most tourists knew. Kimberly Rivers Roberts, an aspiring rap artist, is turning her new video camera on herself and her 9th Ward neighbors trapped in the city.

“It’s going to be a day to remember,” Kim declares. As the hurricane begins to rage and the floodwaters fill their world and the screen, Kim and her husband Scott continue to film their harrowing retreat to higher ground and the dramatic rescues of friends and neighbors. The filmmakers document the couple’s return to New Orleans, the devastation of their neighborhood and the appalling repeated failures of government. Weaving an insider’s view of Katrina with a mix of verité and in-your-face filmmaking, Trouble the Water is a redemptive tale of self-described street hustlers who become heroes—two unforgettable people who survive the storm and then seize a chance for a new beginning.

“Superb… One of the best American documentaries in recent memory…”
– Manohla Dargis, The New York Times

“Gifted filmmakers Tia Lessin and Carl Deal stick it to our absent government and in Kim—who raps her feelings in a voice that demands and deserves a record contract—they have found a human face to put on a national tragedy…Superb in every department. Trouble the Water is a documentary that will pin you to your seat.”
–Peter Travers, Rollling Stone

“The remarkable documentary directed by Tia Lessin and Carl Deal that traced the human and natural consequences of Hurricane Katrina. An audience favorite…”
–David Carr, The New York Times

“One of those electrifying, emotional, unforgettable experiences that captures Sundance at its very best…. Captures a tale of thrilling human drama, terrible tragedy and unbelievable heroism among some of America’s most stigmatized and downtrodden people …No human being I can imagine could watch Trouble the Water and not be overwhelmed by grief and joy, and humbled by one’s sudden awareness of one’s own prejudices about the lives, passions and dreams of poor people.”
–Andrew O’Hehir, Salon.com

“Trouble the Water is aptly titled and is one of the most compelling, intriguing and substantive documentaries done on Hurricane Katrina. It shows both the pain and the resolve of the people affected by a preventable tragedy.”
–Miki Turner, Essence Magazine

0 thoughts on ““Trouble the Water” Screens at Langston Hughes”