A man in his late teens or early twenties was shot in the face a few minutes before seven tonight on the east side of the Garfield Community Center at 23rd & Cherry.  Seattle Police Spokeswoman Renee Witt said that a group of men were hanging out in the area when they were approached by a second group.  An argument ensued, and a member of the second group pulled out a gun and shot the victim.  The victim then entered the community center where he collapsed.  He was treated for a while at the scene before being taken to Harborview, where he was last reported to be in critical condition.

Witnesses reported seeing 4 teen-aged suspects running through the playfield to the south. A K9 unit was brought in but could not establish a track on the suspects. Police detained two of the victim’s friends for questioning, but they escaped through a window before that could happen. No further description of the suspects was available from official sources.

The victim was fairly well known among kids in the community.  We believe he lives with his family just a few blocks north of where he was shot.  I spoke to Saviour Knowledge at the scene who said he knew the victim and had actually spoken to him just earlier in the day.  I can also say that we were familiar with the victim’s name from listening to the scanner, but we don’t have any detailed information to put that in a specific context. (ed. note:  We got the right first name, wrong last name at the scene last night.  Seattle Times reports today that Harborview identified him as Donnie P. Cheatham)

Thirteen-Fifteen-year-old Quincy Coleman was shot and killed on Halloween just across the playfield from this event. We also heard that members of one of the two parties were wearing some sort of t-shirts memorializing Quincy. However, police couldn’t say whether this was a retaliation shooting or otherwise a part of the recent cycle of gang violence.

We’ll add more as we get it.

Here’s the real-time log of information as it unfolded over the night:

At just after 7:00 PM a group of teens were involved in a shooting inside the Garfield Community Center. It is unknown if anyone was hit or if there are any injuries.

Witness saw four teens running SW through the playfield, one wearing a white bomber jacket, the other wearing a brown coat.

No suspects have been apprehended, but police are creating a containment zone.

Update (7:28PM): Police are requesting more units for Harborview, so at least one person was hit

Update (7:30PM by Scott):  I just got back from the scene.  There is one victim with a gunshot wound to the head, a black male reported to be 21 years old.  He was taken out by medic to an ambulance where we was treated for about 15 minutes before being driven to Harborview.  I spoke to residents who live across the park on 25th who said they heard 7 to 8 shots from inside their house.  A large group of friends of the victim had gathered near the scene.  Video coming soon.

Update (7:35PM) : Two potential witnesses were being held in the Community Center and they escaped through a window

Update (8:27PM by Scott): I went back to the scanner recordings to see how it unfolded. The original call came in to 911 at 6:59pm from a resident on 25th who reported hearing shots fired. Multiple other calls then streamed in from others reporting shots fired near Garfield Community Center. A caller also reported seeing 5 black males running away from the scene, described as juvenile black males, about 15-17 years old. The victim was found around 7:01pm with a wound to the face. There was some initial confusion placing him in the Garfield gym complex instead of the community center on the corner of 23rd & Cherry. The gym was placed under lockdown as a precaution.

I heard 5-8 shots outside my apartment at 23rd and Cherry at around 7pm. I went out to see what was what and 3-5 cops, fire, etc. is on site and literally running around, unsure of what is going on.

I walked up to the Garfield CC entrance and Officer states: “You need to get out of here, we are locking the whole place down.”

Update: 9:08pm – I went back to the scene and talked to SPD Spokeswoman Renee Witt, who said that the victim is in critical condition at Harborview.  She said the event started when two groups encountered each other outside the community center.  Words were exchanged, and one of them pulled out a gun and shot a man in the other group.  The victim’s group ran into the community center where the victim collapsed.

A local group of moms who have lost their kids to violence were also on the scene to drive home their message that the string of violence has to end.  They were actually at another event in Columbia City when they heard about the shooting, and then moved the event up here.  Saviour Knowledge was there with them, and he told me that he had actually spoken to the victim earlier in the day. He and the other people at the scene were all upset that the recent cycle of violence was continuing and might end up taking another life. 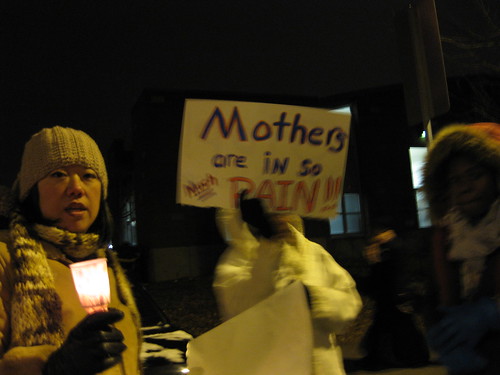 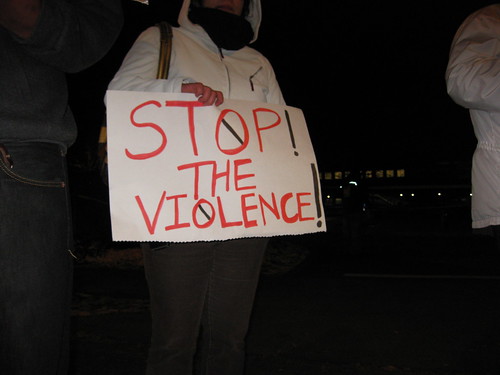 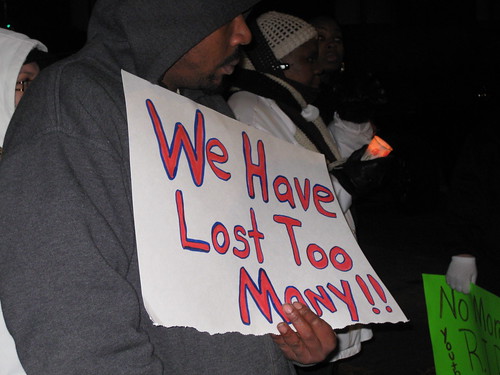