I’ve been a little jealous of our neighbors that live on the hill since learning that someday they’ll have light rail service that arrives every 3.5 minutes in the heart of their hood.

But the good news is that now we’ve got some rapid transit to look forward to around here too. The new East Link project was approved by voters in November, and it will include a stop on Rainier before it heads across I-90 to Mercer Island and the remote hinterlands beyond (known to brave exurban explorers as The East Side).

That will put the station within walking distance of folks in the southern end of the neighborhood, and the rest of us will be able to make a fairly easy connection to it from the #48 bus.  Light rail trains will run every 7-10 minutes during peak hours, and would get you to the International District station in downtown Seattle in just a few minutes, or over to Bellevue in 12 to 15 minutes.

Here’s a very preliminary drawing of how the station will fit in: 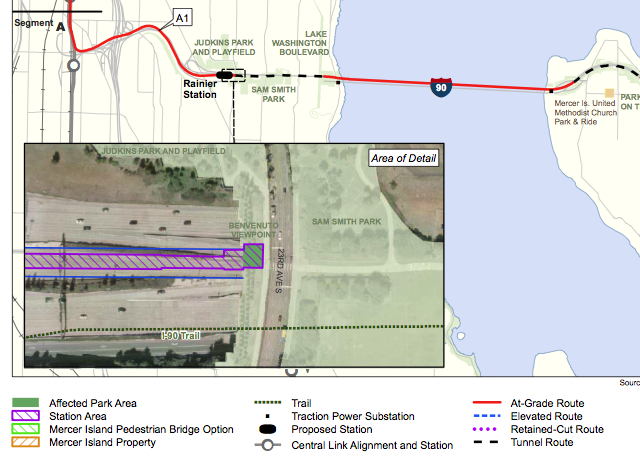 And here’s my own attempt at a map that shows how a station would be approached from either end:

We’re trying to find out when other information and public meetings about this will be available from Sound Transit. We’ll let you know as we find out more.