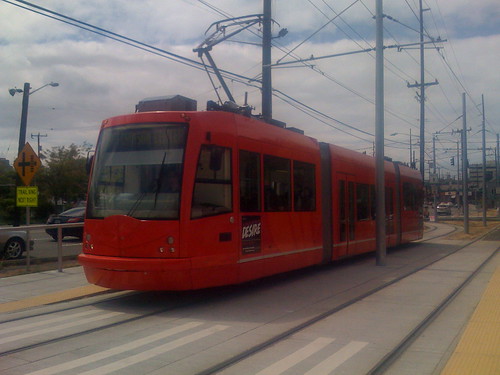 The recent election was pretty momentous at the local level too, with voters approving a new expansion of Sound Transit service around the region. That will eventually bring two new transit options to the edges of the neighborhood: a light rail stop on I-90 at Rainier, and a new street car that will connect Capitol Hill with the International District. According to Sound Transit, there won’t be a lot of details on the light rail stop until a preliminary environmental impact statement that will be released before the end of the year. But the streetcar activity is already getting going.

The plan right now is for Sound Transit to hand over a pile of cash to the city of Seattle, who will take charge of designing, building, and operating the streetcar.  Project manager Ethan Melone says that, if things go as planned, preliminary engineering work could start as soon as February 2009 and the system could go into service sometime between 2012 and 2016 depending on the availability of funding.

The street car is intended to fill the gap caused when First Hill lost their light rail station due to the risk and cost of constructing a facility deep underground at Broadway & Madison.  The streetcar’s route would connect the International District light rail station with the forthcoming underground station on Capitol Hill at Broadway & Denny.  As originally conceived, the tracks would be run east on Jackson to 12th, then north on Broadway to Denny Way.

But that route isn’t necessarily fixed.  In fact, folks on First Hill are making a push to run the streetcar further west, putting it completely out of reach for us.  I’ve talked to several people in the CD who hoped that this new line would be closer to the neighborhood, seeing as we’ve so far been left out of all the cool new transit additions.  We’re also lacking any transit options to all of the fun stuff on Capitol Hill – a new streetcar closer to the neighborhood could help connect us with our buddies on Capitol Hill.

We’ll keep our ears open as this stuff gets going and let you know what’s happening.  And the city’s project manager, Ethan Melone, is available to come talk to any community group in the area.  Invite him to your next meeting if you want to have a voice on how this new system gets planned and built.  You can reach him at 206-684-8066, or at ethan (dot) melone at seattle (dot) gov.

0 thoughts on “The Streetcar You Desire (maybe)”