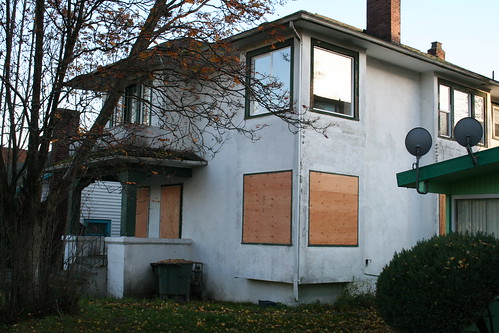 Reader G.S. sent us a copy of a police report about some of the out-of-control activity that’s been going on at a vacant duplex in the 2400 block of S. Washington Street, just a bit east of Pratt Park.  The report is from just after noon on October 7th when members of the Community Policing Team responded to help the owners and the city secure the property.

Here’s how the report describes what’s been going on there:

This location has been the source of numerous complaints of gang related criminal activity.  In fact, several guns were recovered from this particular property, which was believed to be a vacant property. In the past, callers have reported that they believed that juvenile females were being raped and that these male subjects were promoting prostitution of these female subjects for profit.

As they searched the upper floor, several kids ran out the back, ignoring police commands to stop.  But he was soon found hiding in the brush nearby and was arrested for trespassing and booked into juvenile hall. It turns out that the kid lives in Auburn and had been sleeping in the vacant house for the last several days. His mother was described as “very cooperative” when contacted and promised to work with his probation officer to get him back on track.

Vacant properties are often a huge magnet for crime. If you’ve got one near you, the east precinct’s Community Policing Team can work with you to help clean it up.  Contact them at 206-684-4370.

0 thoughts on “Lawless Vacant Property Shut Down Near Pratt Park”