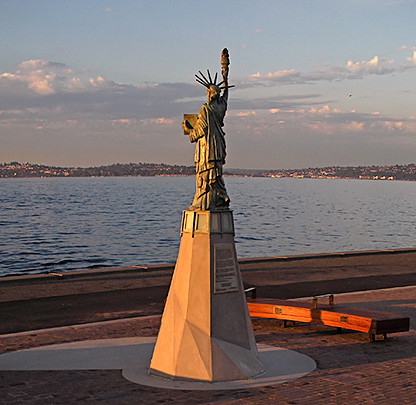 November 13th will mark the 157th Anniversary of the beginning of Seattle.   On that date in 1851 the Denny party landed on the shores of Alki and laid the foundations of the Emerald City.   And although they soon decided (correctly) that the land between Elliot Bay and Lake Washington would be the more promising site for a major city, a miniature Statue of Liberty still marks the spot in West Seattle where they originally made a go of things.

And now, via some current-day pioneers in West Seattle, the SW Seattle Historical Society has a cool project to document life of the city on 11/13 of this year.   They want to collect all sorts of photos, documents, and other timely mementos and put them in a time capsule near the recently remodeled statue.   It will be sealed and left for our grandchildren to open on the 200th anniversary of the landing in 2051.

Your job is simple:  insure that the city’s best neighborhood is included in the history.   So start thinking about what you’d like to include, and stand by for directions on what to do with the stuff you collect.