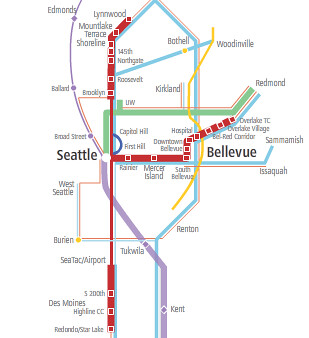 Our second issue in our election-season neighborhood town hall is the phase 2 expansion of Sound Transit.

We’ve talked a lot about transit in the neighborhood and how there’s some room for improvement.  Our buses are usually standing-room-only, and so far light rail has passed us by.

But that could change if the Sound Transit expansion is approved by voters next month.  One part of the expansion would add a new light rail line from downtown Seattle to Bellevue and Overlake, via the I-90 bridge.   That line includes a stop at Rainier on I-90, giving us a rapid transit stop at the far south end of the neighborhood.

Other features of the expansion include:

The expansion will be paid for with an increase in the sales tax, rising from the current 9% up to a new rate of 9.5% for most purchases.   Taxes on restaurant and bar purchases would increase to 10%.  (a nice bonus: easier tax & tip calculation).   Sound Transit estimates that the average family will pay an additional $69 per year in taxes if the measure passes.

Got an opinion?  Throw in your thoughts in the comments below.  And if you have specific questions about the proposal, leave it as a comment and we’ll try to track down the answer from the people in the know.