1.  Youth Violence Initiative – The mayor’s big initiative to address youth violence is entering the budgeting phase.  The plan is to coordinate between schools, social service organizations, and police to catch at-risk youth and help get them back on the right track.  The goal is to completely eliminate shootings involving youth and to get a 50% reduction in other violent juvenile crime and schools suspensions due to violence.  They’re asking for $9 million in funds for the program and plan to have it in full operation by next May.

2.  Violent Crime Stats – The presentation on youth violence included several pages of interesting stats.  The most alarming was a map of gang-related gun events (included below).   It shows 29 events in 2008 in the east precinct, almost double the south and 29 times either the southwest or north precinct.   I asked the Doug Carey, the Mayor’s representative at the meeting, whether that would drive the mayor to redirect police resources to our area.  The answer (paraphrased):  police resourcing decisions are complicated and there’s a lot of factors that go into it, so don’t read too much into this one metric (of violent, life threatening crimes).   Translation:  No 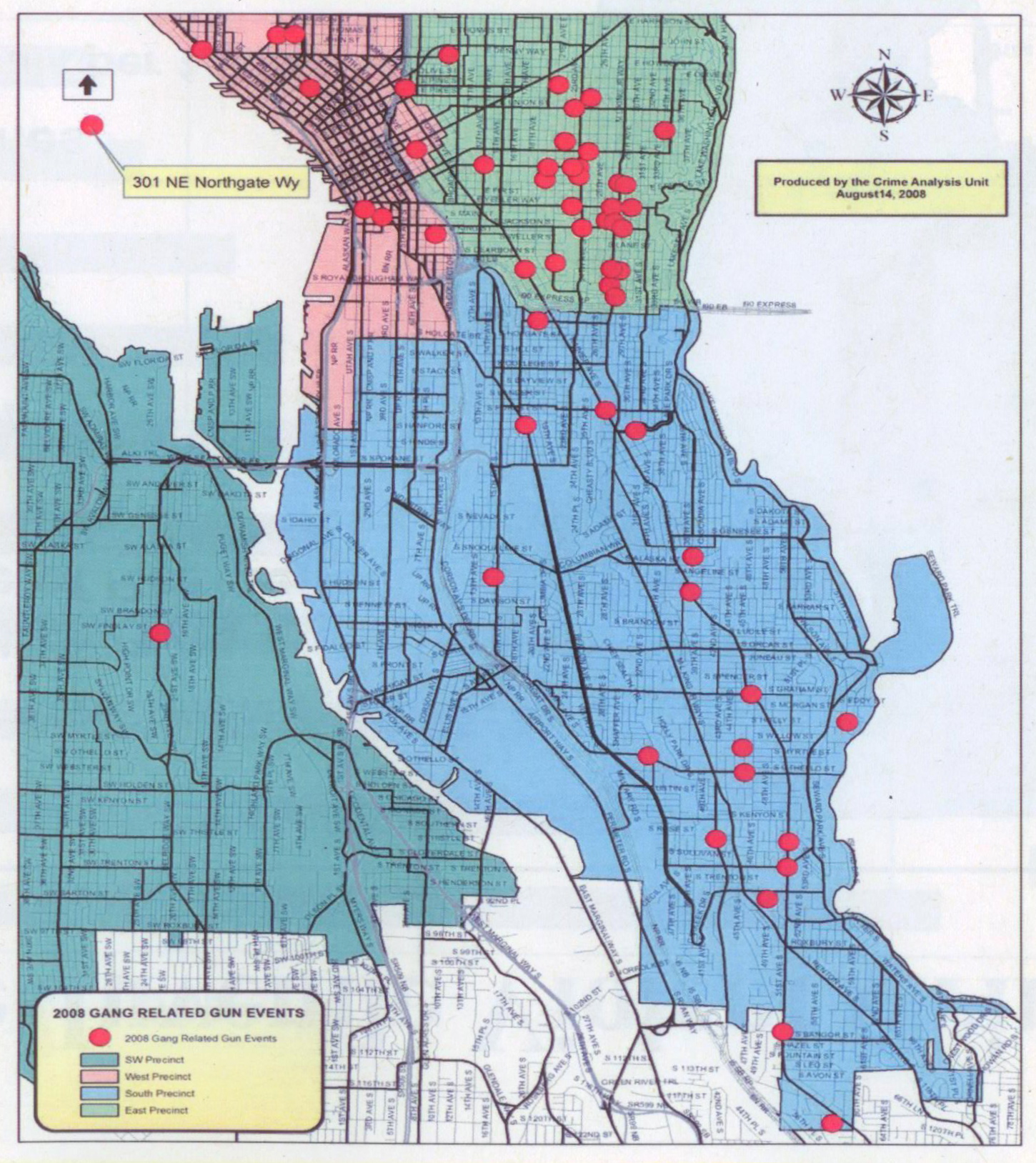 3.  Man Assaulted – One neighbor came to share his story of a recent assault he experienced at 28th & Jackson.  He was walking past the convenience store in that block at around 8pm on the 18th when he passed by 3 kids, about 17 years old.  They quickly jumped on him and pulled out a “pop gun” that looked like the real thing.   They hit him on the head with the weapon, causing it to fire a pop,  and then they ran off.   Police arrived and conducted an area search but couldn’t find the suspects.     Captain McDonagh said there have been at least two other recent incidents that match the suspect descriptions and MO in this case:  one at 23rd & Union and the other at 21st & Union.

4.  Burglary Update – Captain McDonagh says that burglaries are down “slightly” in September.   Part of that is that school is back in session, and another officer has told us that changes in the juvenile court system have taken two of the suspects off the streets.     Although it’s not authoritative data, we’ve also noticed a decrease in residential alarms and burglaries on the scanner in September.

5.  A Life Saved – Capt. McDonagh used a recent incident to illustrate the importance of calling 911 when you see anything out of the ordinary.  On September 22nd, several people called 911 to report seeing a man dragging a woman near Broadway on Capitol Hill.  Police arrived but didn’t initially see them in the area.  But they did hear the faint screams of a woman yelling for help.  They tracked it down to a specific door, knocked, and someone inside suddenly turned up a radio.   When the screams persisted they went in and found a domestic violence victim who had been severely beaten.  She and her child were taken to Harborview for treatment, and the Captain said that she might not have survived if people hadn’t been alert and called 911 at just the right time.

6. Prostitution Up – There was some anecdotal evidence from residents, and confirmation from Capt. McDonagh that prostitution is on the upswing.  Some think that gangs have found it to be an easy way to make money without all of the risk that the drug trade has.  Two particular areas that have been impacted are around 24th & Union and 28th & Jackson.    Once again, citizens are urged to call 911 if they see anything that might be prostitution.

7.  Trash Stats – Grace Reamer from the Colman Neighborhood Association shared some fascinating data from the trash they clean up in the neighborhood.  Every two weeks, offenders from the city’s Community Court help give back by collecting trash around the neighborhood.  And recently they’ve started to sort it all out and keep track of the kinds of crime-related refuse that’s out on the street: