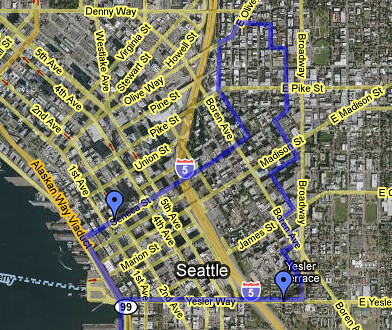 We were listening on the scanner today at 10:15am when a pair of bank robbers led police on a wild pursuit from West Seattle, through downtown, and on a roundabout path through Capitol Hill, First Hill, and Yesler Terrace before ending in gunfire downtown.

I just spoke to Mark Jamieson of the Seattle Police Department, who provided the full path of the chase as they drove through the neighborhoods on this side of I-5.    He said that the pursuit was kept at a “reasonable” speed throughout, as officers were concerned about public safety.

The passenger in the vehicle, a white male who was also the actual robber at the Wells Fargo on California Ave, jumped out of the vehicle at 8th & Yesler at about 10:41am (almost 30 minutes into the chase).  He was quickly arrested by police at that location without further incident.

The driver of the vehicle kept driving on Yesler into downtown, where he eventually became trapped by police on Seneca between 1st & 2nd Ave, and was shot by police after refusing officer’s commands during the standoff.   He was taken to Harborview with life threatening injuries.

There are no other suspects at large.

Update: 4:04pm – We just heard on KOMO 4 News that the FBI has named the two suspects in the case:

Mr. Cox was the driver of the vehicle who was injured in the stand-off with police.  His condition has been upgraded from critical to serious at Harborview.

Mr. Palmer was booked into the King County Jail this afternoon on charges of Investigation of Robbery and Investigation of Eluding a Police Vehicle.  In addition to being a bank robber, he’s evidently a really bad driver, with 59 infractions on record at Seattle Municipal Court.  State courts also show several financial judgements against him for victim restitution and child support.