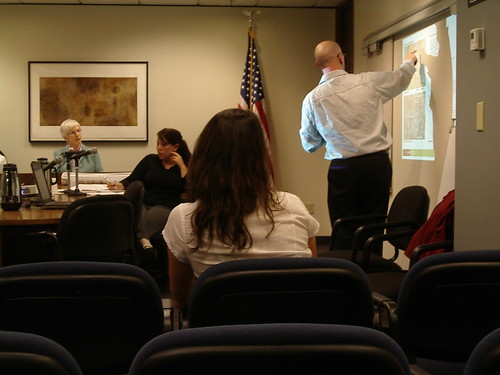 I managed to make my way downtown.. on a workday.. at 1:30p.. for the two-hour meeting that allowed the public to testify before the city hearing examiner on the new building being eyed for 23rd Avenue and East Union. The main issue: The developer, Jim Mueller, wants to add another 25 feet to the height of the proposed apartment complex and retail space, topping it out at 65 feet. (Current zoning only allows 40 feet in that part of the city.)

Seven homeowners also managed to make time to get to the meeting. Six of them strongly support the request; the other is against it. A quick recap of some comments:

* Woman who lives on 21st, she’s the one who doesn’t like the idea: She says there’s “no great public benefit” to the rezone, and that the plans don’t take enough into account of the “architectural history of what was once there” (remember the old building damaged in the earthquake?) She also still wonders: “Four floors is good, but why six?”

* Man who lives on 21st: “This development is a longtime in coming.” “It takes into consideration everyone in the area.” “65 feet would not be outrageously large.”

* Woman who lives near 20th and Union: “Waiting a long time for positive development with shops and services there.” “That intersection is the Bermuda Triangle of the city.” “It’s a cursed corner” that needs this project.

* Woman who lives on 24th, one and a half blocks away: “Watched the area deteriorate over the years.” “Building would put ‘eyes on the intersection’ and help ward off drug activity and prostitution.” She’s talked with lots of neighbors and they all give the project “A big collective YES.”

* Man who lives on 24th: “Positive development means change for the good.” “Developer really can’t move ahead without the change.” “City has the opportunity to do the right thing.”

* Man who lives near 23rd and Marion: “The city’s strategy is to become more sustainable.. and that’s what this new building will do.” “Area is very unpleasant the way it is now.”

* Woman who lives near 17th and Spring: She greatly likes the idea the developer is pushing of “locally owned and operated merchants moving into the shops.” Says this is terrific “revitalization.”

An architect and project manager of the planned 23rd and Union development was there to walk the hearing examiner through what’s being considered, what changes have been made and why the complex would be such an asset to the neighborhood.

A few other points: The developer is also asking for a waiver that will make three mandatory parking spots for the businesses no longer necessary, saying there’s plenty of street parking. (Right now, the 92-unit building will only have 74 parking places for tenants in its underground garage.) The hearing examiner will now make a recommendation to the city council, which will have the final say on the rezoning request. (We’ll keep watch on when that’s supposed to happen.) Jim Mueller has said if it goes through, construction should start next spring.

0 thoughts on “Homeowners Speak Out on 23rd & Union Project”