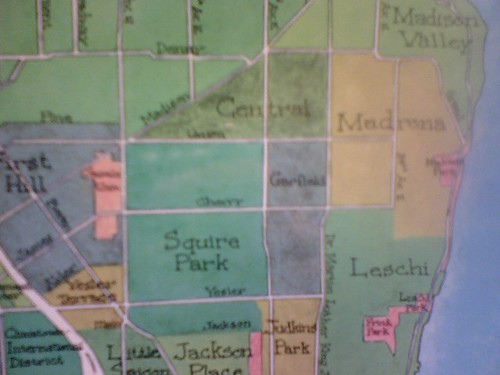 So my walk to the gym today from the CD to downtown took me by the Barnes & Nobles at Pacific Place. There in the window: A cool looking neighborhood map of Seattle. I’m a self-professed sucker for maps. Love ’em. I lingered. It had areas marked off of our fair city I had never heard of before. Plenty of history behind that I’m sure. (I would have bought it right then, but it was an overpriced $25.)

But something about where I live caught my attention as I studied it, and I snapped a (grainy) shot of what I saw with my cell phone. The map shows the smallest boundaries of the Central Area I’ve ever seen, and in an odd area. It has the southern edge at Union, with Madison on the westernish flank, up to Denny and over to MLK on the east. It marks off Squire Park as being nearly twice the size, and a neighborhood simply called “Garfield.”

We all know people tend to have varying viewpoints about what something’s called and where it ends and begins. It’s a robust, ongoing, intriguing debate. But from what you can make of this, what do you think? Is the CD being squeezed?

0 thoughts on “Putting the squeeze on the CD?”