Last night I, along with about eighty residents of the area, attended the State of the Central District Community Forum at Seattle U’s Schafer Auditorium organized by Dr. Mako Fitts and Dr. Gary Perry of the Sociology Department. Along with the help of some of their undergraduate students, Drs. Fitts and Perry analyzed the effect of gentrification in the Central Area.

The students reviewed literature and spoke to members of the community and concluded that gentrification is the fundamental driving force behind the current changes in the neighborhood, and that these changes are bad for the neighborhood and the city of Seattle as a whole.

They confirmed what most residents of the CD already know: the longtime residents, who are primarily African-American, are being pushed South because of skyrocketing housing prices and property taxes, and are being replaced by predominantly affluent, white residents. Overall, they showed that the longtime residents have been in a lose-lose situation for the past fifty years. At, first the Central District was the only neighborhood they could live in, and today many are even being excluded from that.

The panel was asked how the Central District has changed from their vantage point, and the audience heard very diverse view points that ranged from a decrease in young families to the death of the city’s African American voice, social conscious, and unique cultural heritage.

The evening’s commenters listed one problem after another and had a very negative and bleak outlook for the future of the African-American community in this area. What was absent from the evening, as Andrew Taylor pointed out, were any solutions to these problems. Gentrification is a side effect of the overall rise in the property values, and no one offered any ideas of what can be done to address this. The trick is how to deal with gentrification while keeping the unique culture of the neighborhood and making all of the newcomers feel welcome. 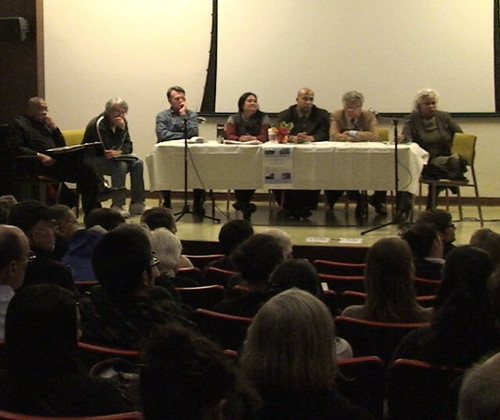 0 thoughts on “The CD: Lots of Problems, Few Solutions”