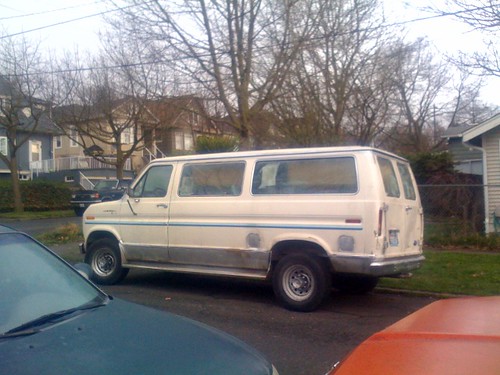 They’ve popped up a couple of times on the scanner: white vans with eclectic occupants and some involvement in the local drug trade. The latest example was yesterday at 4:43pm, and there was an earlier discussion about them back on January 25th. Based on the reports we have, their Ford-powered caravan really gets around, having been seen in varying parts of the neighborhood over the last year or more.

The people involved are pretty unforgettable. There are two females who wear a variety of flowing scarfs, sometimes in the keep-sand-out-of-your-face style more often seen in desert regions. One is usually sporting a huge medallion around her neck. It’s an 8-sided star design, at least a foot across, with a thick gold colored chain. The other female can often be seen wearing a painted football hockey helmet, sometimes including a face mask. There’s also a much less noticeable male that is part of the party, usually with headwear and scruffy beard.

A commenter put it well in the thread on 1/25: they seem to be involved in drug activity, but evidently that’s hard for police to catch them on. Other than that, they live out of the vehicles, but that isn’t illegal. The traffic they draw to the vans understandably makes residents nervous, and there’s other obvious issues such as bathroom facilities whenever someone is living in a vehicle in a residential area.

And incidentally, the drug activity isn’t just in the imagination of those that have reported them to the police. We heard the medallion woman’s name on the scanner yesterday, and a quick search of King County Jail bookings shows that she was arrested both in November 07 and January of this year for drug violations. She has also been arrested for driving without a license, but that doesn’t seem to stop her from driving the van around.

Yesterday police responded to check them out but ended up leaving without making any arrests. And the vehicles are operable so they tend to get moved before the 72 hour parking limits kick in.

We got an email today from a neighbor near their current location who asked an interesting question: what can and should be done about them? My only suggestion was the usual – call 911 if you see illegal activity, and call parking enforcement if a vehicle is sitting for more than 72 hours.

Now I know this post may rub some of our readers the wrong way. We definitely shouldn’t criminalize homelessness, and it’s a problem that needs social service solutions to address the root causes of poverty (although getting these particular people to take advantages of such services might be a completely separate challenge). But I’m guessing that there aren’t many in the neighborhood who would want people to be camped out in vans in front of their houses with a stream of drug traffic coming and going at all hours.

So the question is open for discussion. What, if anything, should be done to help out with our neighborhood gypsies?