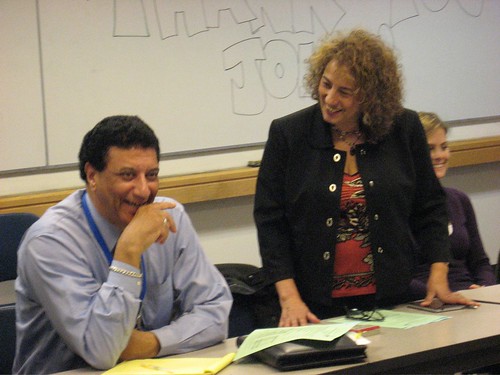 Tonight I made my first visit to the quarterly monthly East Precinct Crime Prevention Coalition Meeting (EPCPC). The goal of the meeting is to put residents, police leadership, and other city officials together to work through crime and other quality of life issues in the area stretching roughly from I-90 to 520 and I-5 to the lake.

Tonight’s meeting was a special one, because it was the last meeting for Lt. John Hayes, who has been the go-to guy for crime prevention and police community outreach in the East Precinct. He’s moving up to a much larger role down at police headquarters, and there were quite a few people on hand to thank him for his work and wish him the best in his new position. One of Lt. Hayes’ strengths was his ability to work through issues and disputes between different people in the community. “Whenever there are neighbors or groups of people arguing, you can put John Hayes in the middle of it and they become friends.”, said Stephanie Tschida. Another longtime friend of the Lieutenant said that he “Always had the ability to pull people together, and find some common thing that was workable. He’s always had the ability to get things done.”

One of the main features of the meeting is that it provides an opportunity for individual neighbors and block-watch leaders to bring up issues in the area for police and other authorities to help out with. And it was evident that a key focus is on prevention, not just enforcement. For example, one resident asked for advice on dealing with a neighbor’s untrimmed trees that serve as a hiding place for various illegal activity. In addition to some legal advice from an assistant in the City Attorney’s office, police leaders had a great suggestion: organize a block-watch cleanup party, and ask the neighbor if they would allow the tree to be trimmed in the process. Most neighbors will agree since it saves them some work, and the city will provide free trucks, tools, and trash hauling services to help get it done.

Here’s other issues that were raised:
25th & Jackson – Neighbors there are having continuing problems with a tenant in a subsidized apartment building. Evidently he’s constantly in and out of jail, and when he’s out he’s driving them crazy with raucous parties and visitors who crash into parked cars on the street. He told Capt. McDonagh that “You don’t need to go searching for this guy. He’s right there all the time.” Police officials promised to follow up within a week and see what can be done to help the situation.

Coleman Neighborhood – A resident there brought up the recent spree of muggings that have happened around 25th & Lane, such as this one and the one that got Toeblister the week before. Police wondered aloud whether the kids were students at nearby Washington Middle School and promised to look into it more.

34th & Irving – A resident who lives on top of the I-90 tunnel, looking out over the bridge, wanted to report a big increase in property crimes in recent months. They’ve had many home break-ins, cars broken into multiple times in a single week, and a home-invasion robbery a couple of months ago. They also have recurring problems with people using the small park over I-90 for drugs and other nefarious activity.

20th & Jackson – The owner of Hidmo’s restaurant read from a prepared speech about some problems she’s having with the police at her business. She said that their presence has been excessive and is damaging her business by making her customers feel unwelcome and threatened. She also reported that there’s been numerous occasions when officers have treated her and her employees disrespectfully. One time an officer came into the business looking for a suspect, and when queried he said that “they look like everyone else in here.” Capt. McDonagh said that while they won’t back off on their enforcement efforts around bars and restaurants, he would make sure that all officers display a professional demeanor.

31st & Cherry – A neighbor reported an upswing in drug activity and large groups of people hanging out in the street, blocking traffic. She reported seeing a couple drive up, let their young child out of the car, tell him to walk up the street a bit, and then score some drugs from a local dealer.

A few more interesting tidbits:
– Key Bank at 24th & Union will be getting new lights, a surveillance system, and will begin to trespass people who are in the parking lot after business hours.
– Police are seeing more drug activity during day hours from 19th to 27th along Union
– A notorious tagger who had hit 47 businesses on Broadway was arrested last week
– 20 people have been arrested in the last week for violent crimes, after a special effort by detectives
– 47 traffic tickets were given near 21st & Union in one day last week. It was specifically targeted due to recent drug activity in that area.

If you’d like to attend an EPCPC meeting, they’re held on the 4th Thursday of the month, at 6:30pm, at the Seattle Vocational Institute building at 21st & Jackson. The next one is April 24th.